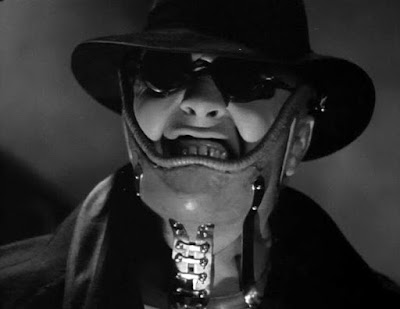 Aaahhh! Here's Peter Lorre making his American debut for MGM after triumphing in Fritz Lang's M (1931) and The Man Who Knew Too Much (1934) for Alfred Hitchcock. He stars as Dr Gogol, a pioneering surgeon in Paris who is in love with another man's wife: Yvonne (Frances Drake), an actress in a Grand Guignol theatre. When her husband, virtuoso pianist Stephen Orlac (Colin Clive, James Whale's Victor Frankenstein), loses both hands in a train wreck, Gogol agrees to conduct an experimental transplant. The bad news? The hands he grafts onto his stricken rival are those of Rollo (Edward Brophy), a circus knife-thrower turned murderer who has recently been executed by guillotine. When the recovering Orlac suddenly starts flinging blades around someone's bound to get hurt and his oediapl nightmare of a father (Ian Wolfe) looks like a prime target. Meanwhile, Gogol continues to pursue his infatuation with Yvonne through a wax statue he has acquired of her, dreaming of bringing it to life as Pygmalion did Galatea. You know this one won't end well. The scene above, incidentally, finds Lorre claiming to be Rollo, the dead man, who convinces Orlac that Dr Gogol has brought him back to life by clamping his head back on with a makeshift neck brace and giving him sinister metal gauntlets for hands. He's trying to drive Orlac mad and it's not a bad effort.

Here's a wonderfully naive trailer for Mad Love in which Lorre graciously answers a phone call from a handsome fangirl:


Aside from its certifiably krazy plot courtesy of Frankenstein (1931) screenwriter John L. Balderston, this lurid horror is full of deliciously over-the-top details and nutty characters, from the wisecracking American reporter (Ted Healy) to the soused British landlady (May Beatty) who sees double and dotes on a pet cockatoo. Clive and Drake are excellent while Lorre is amazingly unsettling as the necrophiliac mad scientist, a bald brother to Max Schreck's Count Orlok in Murnau's 1922 Nosferatu, whose name might conceivably have been taken from Maurice Renard's source novel here, The Hands Of Orlac (1920). Renard's book had already been filmed in Austria by Robert Wiene as the silent Orlacs Hände (1924), starring Conrad Viedt, the same director-actor team behind the seminal expressionist classic The Cabinet Of Dr Caligari (1920). It would be remade once more under its original title in 1962, with Christopher Lee and Mel Ferrer. The botched transplant/evil limb theme remains a horror staple, from the convict's brain in Whale's Frankenstein to the homicidal disembodied hand in The Beast With Five Fingers (1946, also featuring Lorre), Jan's decapitated head in The Brain That Wouldn't Die (1962) and Bruce Campbell's haunted fist in Evil Dead 2 (1987). In the era of bio-engineering and full face transplants, the idea could run and run. 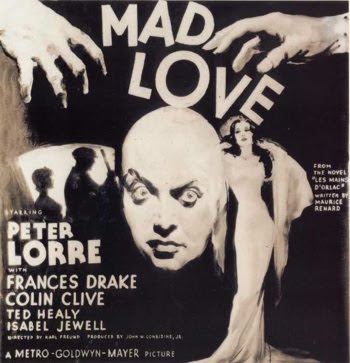 Famed New Yorker critic Pauline Kael apparently accused Orson Welles of stealing aspects of Mad Love for Citizen Kane (1941), including some of Gregg Toland's camera angles. Nuts. It is true that Charlie Chaplin pronounced Lorre the world's "greatest living actor" after seeing the film and British novelist Graham Greene was impressed enough by Mad Love to write an essay entitled 'The Genius of Peter Lorre' for World Film News in July 1936. His thoughts on this fading star, whose legacy Greene feared for even then, are worth repeating: "To Lorre alone we owed the goodness, the tenderness of the vicious man. Those marble pupils in the pasty spherical head are like the eye-pieces of a microscope through which you can watch the tangled mind laid flat on the slide: love and lust, nobility and perversity, hatred of itself and despair jumping out at you from the jelly. His very features are metaphysical."
Posted by Joe at 14:42