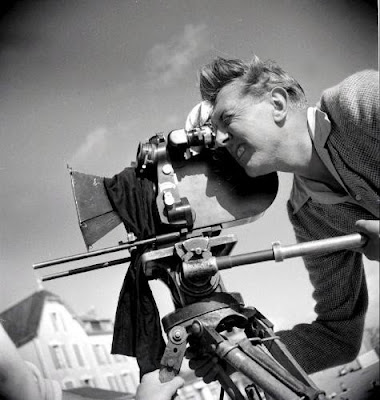 The legendary Jacques Tati directing on location at Saint Marc-sur-Mer, Brittany, in 1952 for Mr Hulot's Holiday. The comedian had been a keen sportsman before he entered the Paris music-halls and this summery outing provided him with plenty of opportunity to exploit his athleticism - his famous thrusting tennis serve being the most obvious example, though he is also frequently required to run away from the scene of a crime, as when he accidentally locks someone in the boot of their car or in the episode below where he kicks a pompous tourist up the arse after mistaking him for a Peeping Tom. Hulot's canoe snapping in two to form a Jaws-like sea monster and his elegant trip into the harbour are other examples of Tati's idiosyncratic brand of physical comedy in full flight. 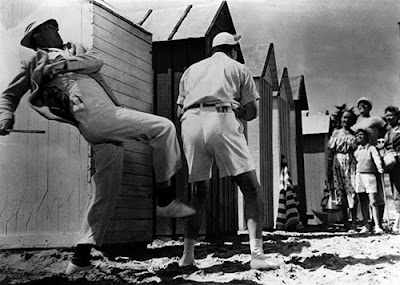 Four years after his feature debut in Jour De Fête, in which he played a manic village postman obsessed with speed, Tati created his most enduring character, a bumbling but genial pipe-smoker who unknowingly causes havoc wherever he goes. Like Tati's idol, Charlie Chaplin, Monsieur Hulot is immediately recognisable from his silhouette and peculiar stance - always leaning perilously forward on his plimsolled tip-toes as though scenting some unseen rose, wearing too-short cuffed trousers and a crumpled hat to accentuate his oddball appearance. This is a man who approaches life from the wrong angle and could easily be knocked off balance at any moment, his very gait and springy step promising calamity.

André Bazin called Hulot "a scatterbrained angel" and he is certainly a benevolent sort of misfit, befriending all around him even when he's breaking social convention and causing annoyance at the Hotel de la Plage by murdering his fellow guests at ping pong or upsetting other diners by playing jazz records at excessive volume. Tati could have chosen to make a joke out of the elderly English woman (Valentine Camax) who is so taken with Monsieur Hulot but instead his hero is kind to her and it's this cheery, accepting worldview that makes the character so winning. Like W.C. Fields, inanimate objects cause Hulot no end of bother, but the truth about the Frenchman is that the disorder that erupts all around him is only directly caused by the man himself some of the time - often it's the fault of others who are so busy trying to avoid and anticipate him that they fail to see what's going on directly in front of them.

Tati, an outsider growing up in Yvelines with Russian and Dutch parents, uses Hulot's clumsiness and ineptitude as a means of disturbing and exposing stuffy French social mores, manners and expectations. He saw his creation as an Everyman figure and once said: "You all have at least five minutes of Hulotism a month, when you take the wrong seat on a train for example." Hulot would appear thrice more on screen - in Mon Oncle (1958), Play Time (1967) and Trafic (1971). Long periods elapsed between each film because Tati was a committed perfectionist, sharing an obsessive dedication to his craft with Chaplin, a trait that led to his being declared bankrupt during the shooting of Play Time. 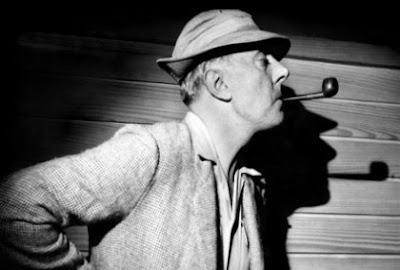 Mr Hulot's Holiday plays out at an appropriately leisurely pace like a satirical landscape painting brought to life, mocking the French middle classes at play, those frustrated drudges determined to have a good time at any cost during their two weeks away from the office in mid-August. Rogert Ebert said that rewatching the film every summer is like returning to your favourite resort year after year and I think he's right. Families arrive by train, racing from one platform to another, while Monsieur H rolls up in his ridiculously rickety 1924 Amilcar, an auto that looks more like a bumper car with a bicycle attached on either side. We see the dotty old couple who wander along the beach (Marguerite Gérard and René Lacourt): she excitedly picking up shells to show her husband, he tossing them nonchalantly over his shoulder into the nearest rock pool as soon as her back is turned. There's the quixotic old major (André Dubois), the jaded hotel manager (Lucien Frégis), haunted by the muddy footprints all over his nice clean lobby, and Martine (Nathalie Pascaud), the pretty girl all the boys are after - not least the bookish young Marxist who persists in boring her by reading aloud from his weighty political tracts. All are presented together in Keatonesque wide shots, as Tati believed this would keep the focus on group dynamics and emphasise the town as a microcosm for humanity as a whole. Meanwhile the dialogue-free soundtrack has a lovely score by Alain Romans and is otherwise peppered with the amusingly banal and overlapping background chatter of holidaymakers, a naturalistic device used here several decades before Robert Altman was credited with inventing it. All life is here. And death too. There's even a funeral that Monsieur Hulot manages to sabotage by accident, his spare tire sodden with wet leaves mistaken for a wreath by the family of the bereaved. The costume party and mishap in the fireworks shed though remind us that Tati is celebrating humanity, not burying it.

A bronze statue now peers out over the bay at Saint Marc-sur-Mer to commemorate the filming of Mr Hulot's Holiday. The good news for Tati fans is that Sylvain Chomet, the animation genius behind Belleville Rendez-Vous (2003), is due to release a new film based on an unused Tati script very shortly. Written in 1956, it's called The Illusionist (2010) and is about an unsuccessful French stage magician who tries his luck in Edinburgh. I can't wait.
Posted by Joe at 09:57