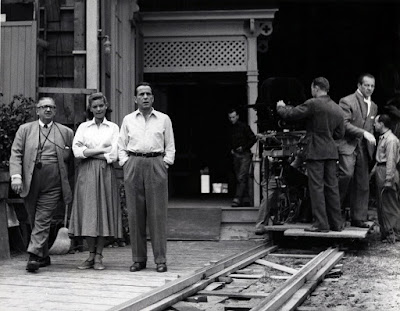 Bogie's war veteran Frank McCloud pitches up at a shabby hotel in Florida's Key Largo to pay his respects to the father (Lionel Barrymore) and widow (Lauren Bacall) of an old army buddy, George Temple, who died in action. There he finds the lobby filled with shady characters determind to foul up the already balmy atmosphere and a bartender who won't serve him a beer. Something's wrong. McCloud soon learns that deported gangster Johnny Rocco (Edward G. Robinson) and his "fishing buddies" have occupied the hotel in order to carry out an exchange of counterfeit bills before casting off back to Cuba. What's more, there's a tropical hurricane on the way and things look like they're about to get tense.


Paul Muni had starred in the stage version of Maxwell Anderson's 1939 play but John Huston and producer Jerry Wald thought it would make an ideal vehicle for Bogart and Bacall so Huston set to work on a screenplay with Richard Brooks, updating the action from the aftermath of the Spanish Civil War to WWII and adding touches to suit Bogie, such as McCloud's love of sailing. The end result is very much about McCloud's Hamlet-style battle with his own conscience. Disabused of his ideals following his experiences in Italy during the war, McCloud had been inspired to fight because he "once believed some words" spoken by Franklin D. Roosevelt at the UN: "We are not making all the sacrifice of human effort and human lives to return to the kind of world we had after the last war." But after the horrors of conflict, seeing death all around him from every hilltop, Frank's now come to believe that all that matters is looking out for number one: "One Rocco more or less isn't worth dying for." This kind of attitude doesn't do much for his approval ratings with Bacall: she loves him when he proves to be a capable seaman, hates his "cowardice" in refusing Rocco's invitation to a shoot out and loves him all over again when he gives the shaken Claire Trevor a drink and takes a slap in the puss for his insolence. To get the girl, McCloud must rediscover his faith in Roosevelt's words and understand that the deaths of George Temple and a million boys like him count for nothing if a man like Rocco is allowed to live and thrive and drag America back to the bad old days. He must rise up and take a stand one more time. "When your head says one thing and your whole life says another, your head always loses," in Bogart speak. 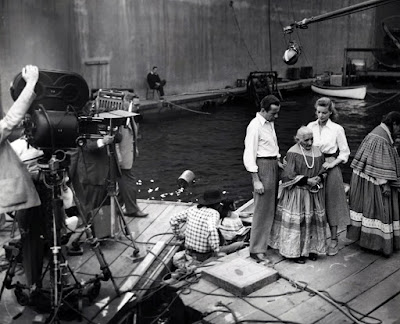 In Film Noir (1992), Joan Cohen called Key Largo "gangster-gothic", an accurate description of the shadow Robinson's performance casts over the picture. A vain, deluded toad of a man, Rocco is introduced puffing a cigar in the bath and dreaming of his glory days during Prohibition. Later this fallen Capone struts around the delapidated Hotel Largo in a fat tie and two-tone shoes, taunting an old man in a wheelchair and bullying Trevor's washed-up, alcoholic lounge singer, another relic of the good times who stands as a living reminder of how far things have changed. He hates her drinking and controls her through it, forcing her to sing 'Moanin' Low' for her scotch in a weak, threadbare voice that he then dismisses as "rotten" and uses as an excuse to keep her thirsty. Trevor is excellent and well-deserving of her Oscar. Was there ever a more bitterly ironic misnomer than "Gaye Dawn"? Rocco is a man from another time and badly out of place. He's frightened of the storm and should be embarrassed to find himself languishing in an off-season palm tree resort on the southernmost tip of the United States. Hardly the Chicago of the Roaring Twenties. Like Cagney in White Heat (1949), this was Robinson's closing statement on the Warner gangster pictures that had defined and typecast him in the early part of his career. 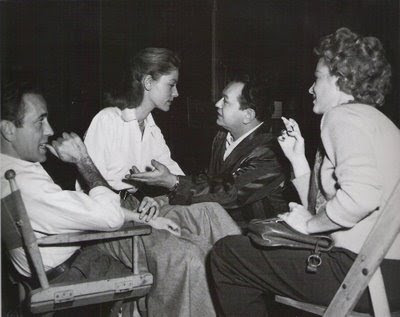 Huston's film has lovely deep-focus photography from Karl Freund (who also shot Fritz Lang's Metropolis, 1927) and an immensely strong sense of place, the hotel a perfectly self-contained, microcosmic environment that never once feels confined or stagy thanks to the dramatic device of the hurricane, which makes it a necessity that everyone stays indoors. The storm itself is also very effective (partially done by using recycled stock footage from an old Ronald Reagan movie, Night Unto Night, directed by Don Siegel in 1949), the plight of the Seminole Indians huddled outside seeking sanctuary adding to the tension. One of the two Osceola Brothers on the run from the cops is played by Jay Silverheels, who went on to star as Tonto in The Lone Ranger TV series between 1949 and 1957. As for the rest of the star-studded cast, special mention should go to two of the actors playing Rocco's genuinely unpleasant henchmen - Thomas Gomez as the corpulent, gum-chewing Curly and Harry Lewis as the spivy, psychotic hyaena Toots. Robinson, Bogart and Trevor had all appeared together before in The Amazing Dr Clitterhouse (1938), the latter two also united in Dead End (1937), while Bogie and Bacall of course appeared together in To Have & Have Not (1944), The Big Sleep (1946) and Dark Passage (1947), as well as in the similarly tropical Bold Venture radio series.