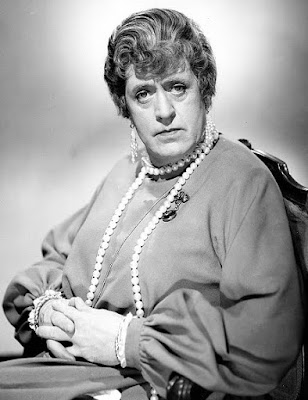 Zowie! The immortal Alastair Sim as long-suffering headmistress Millicent Fritton in Frank Launder and Sidney Gilliat's popular naughty schoolgirl franchise adapted from Ronald Searle's famous cartoon series. The Scot (1900-76), a failed tailor and one time elocution instructor, softens his voice and dons pearls and a blouse here but otherwise goes about his business in a very matter-of-fact manner, avoiding the camp innuendo of a pantomime dame to make Miss Fritton a living, breathing character. You quite forget you're watching a large man in a fright wig after a while and that's as it should be with theatrical cross-dressing. Only in the scenes in which he appears twice, once as Millicent and once as Clarence, her con-man brother, is the illusion broken but, technically, the seams never show.

Though fondly remembered, this opening sally in the St. Trinian's saga is, in truth, rather too slow and short on jokes to be really funny. The plot concerns the kidnapping of a race horse, Arab Boy, due to run in the Cheltenham Gold Cup and on whom Miss Fritton has bet the school's entire £400 budget. George Cole, Sims' protégé, does well as Cockney spiv Flash Harry, who appears to live in the bushes opposite the school and assists the pupils in their various extra-curricular activities - namely, bookmaking and selling bootleg gin distilled in the science lab. This dodgy geezer role would give Cole the template for an entire career, culminating in his much-loved turn as Arthur Daley in the hit TV series Minder (1979-94). The girls meanwhile are rather a homogeneous mass of hellions and anarchists: the fourth formers bearing African tribal shields and spears, pelting each other with flour bombs and stretching their enemies out on the rack; the twenty-something sixth formers all sultry coquettes in risqué miniskirts. Only capo di tutti capi Bella Fritton (Viviene Martin), insurgent leader Jackie (Diana Day) and swotty informer Florrie (Jill Braidwood) stand out, while the rest of the jaded teaching staff, including Beryl Reid, Joan Sims and Irene Handl, are criminally underused. Joyce Grenfell, as unlikely undercover cop Ruby Gates, reunites with Sim after their short scenes together in Hitchcock's Stage Fright (1950) and Mario Zampi's Laughter In Paradise (1951) and brings a rare note of innocence to proceedings, as well as a funny walk that serves as a quite literal rendering of the term "flat foot." Her attempts to referee a violent hockey match while Sim smirks behind a prize table draped with the Union Jack is a definite highlight. Also worthy of note is the jaunty theme by Malcolm Arnold. 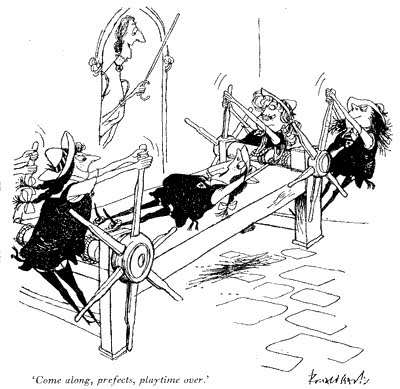 Searle had begun drawing his St. Trinian's girls in 1942 as a searing antidote to the jolly children's fiction of the period, typified by the prolific output of Enid Blyton, the Jennings novels of Anthony Buckeridge and Richmal Crompton's Just William stories. Searle was then called up to serve in WWII, where he was stationed in Singapore, captured by the Japanese and then almost worked to death building the Siam-Burma railway through the Kwai jungle. As a POW detained at the notorious Changi labour camp, Searle sketched by night to keep his sanity, his body wasting away from hardship, malaria and the brutal punishments of the guards. By the time he returned to England, his view of human nature had blackened sufficiently so that it began to show through and shape the inky mire of his drawings. His St. Trinian's illustrations appeared in the magazines Lilliput, Life, Punch and Holiday and were compiled in a series of anthologies that began with Hurrah For St. Trinian's in 1948 and ended with Souls In Torment in 1953, by which time Searle had grown so sick of his marauding femmes that he decided to wipe them all out with an atomic bomb, moving on to savage life behind the walls of a boys' private school in the popular Molesworth books (1953-59) with Geoffrey Willans. The artist has a small cameo in The Belles Of St. Trinian's, playing one of the aggrieved parents who arrive amidst the warfare, only to be trampled by the Old Girls' reunion. Searle had met producers Launder and Gilliat when he was asked to draw the title cards for their previous school comedy The Happiest Days Of Your Life (1950), which had also featured Sim, Grenfell and Richard Wattis (the Minister for Education here). His artistic style is referenced throughout the film via the messy ink blots that stain the school's wood-paneled corridors. 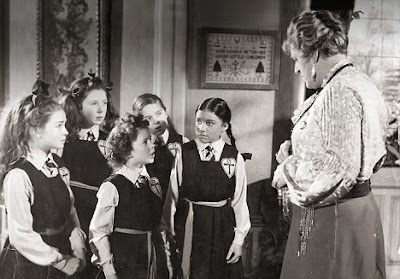 After Belles, this big screen franchise would march on to three sequels - Blue Murder At St. Trinian's (1957), The Pure Hell Of St. Trinian's (1960) and The Great St. Trinian's Train Robbery (1966), with Grenfell and Cole outlasting Sim, before an ill-advised revival in 1980 written by Launder and Searle, The Wildcats Of St. Trinian's. And the recent remakes with Rupert Everett, Russell Brand, Gemma Arterton et al? Just say no. Why anyone but a pea-brained raincoat-rustler would favour these pointless, soft-core retreads over the charming fifties-sixties originals is beyond me. As for the 2006 Hollywood remake of School For Scoundrels, replacing Alastair Sim with Billy Bob Thornton, I don't even want to know.
Posted by Joe at 10:41