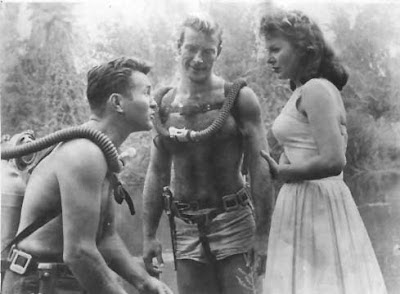 Roger Corman and his brother Gene produced this smart little monster movie, which is set in the stifling swamplands of the Florida Everglades and concerns a pair of grotesquely mutated annelids who have started sucking the blood of local moonshiners and jug-swiggers. There's a thoughtful script by Leo Gordon that makes inventive use of the geography of the area - the underwater catacombs providing air pockets that the leeches use to keep their weakened victims alive - and dares suggest that radiation from Cape Canaveral might have caused the mishap, perhaps an implied critique of America's expensive, adventurist space programme of the period. The direction from Bernard L. Kowalski is economical and captures a nice Southern Gothic mood in the white trash love triangle going on between the proprietor of Dave's General Store (Bruno VeSota), his no-good tramp of a wife Liz (Yvette Vickers) and her parasitical lover Cal (Michael Emmet). Vickers was a veteran of Playboy magazine and Attack Of The 50 Foot Woman (1958) and is the highlight among a uniformly excellent cast, though Gene Roth also deserves a nod for bringing authenticity to the stock role of sceptical county sheriff. The game warden hero (Ken Clark) may be a little too straight-laced for his own good and the titular attack does ultimately boil down to two guys paddling around in the shallows wearing bin-liners with suction cups taped on, but it's a brooding piece of work and one that deserves every credit for having the courage to take its premise seriously. The dynamite ending is suitably unshowy and an endearingly practical solution to the problem.