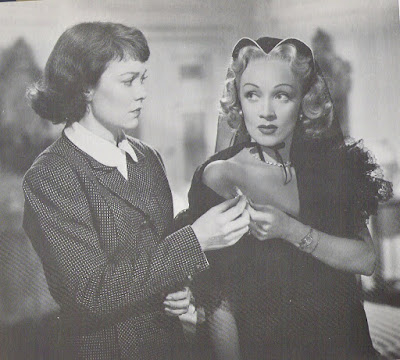 I can't believe it's taken me this long to feature an Alfred Hitchcock film but here we are with Stage Fright, one of Hitch's least favourite amongst his own work. The great director was highly dismissive of it in later years, blaming his actors (whom he famously considered “cattle”) for Stage Fright's commercial failure and telling François Truffaut, “The more successful the villain, the more successful the picture. That's a cardinal rule and in this picture the villain was a flop!” A shame, as Richard Todd has an authentically deranged look about him when confronted with the truth and the denouement, in which blacky ironic use is made of a “safety” curtain, is very effective indeed.

Stage Fright stars Jane Wyman as Eve Gill, a student at the Royal Academy of Dramatic Arts (RADA) whose rehearsals are interrupted when a friend, Jonathan Cooper (Todd), arrives in a state of some distress. He confesses to Eve that he is the lover of renowned actress Charlotte Inwood (Marlene Dietrich) and that he has helped to cover up the murder of her husband by returning to the scene of the crime to conceal evidence. However, the police are chasing Jonathan after he was spotted by Charlotte's spiteful maid Nellie Good (Kay Walsh) and he now needs a means of escape. Eve, in love with him, agrees to help, roping in her eccentric father along the way (a very droll Alastair Sim), but soon finds that all is not as it seems when she goes undercover to stand in for Nellie at Charlotte's side. 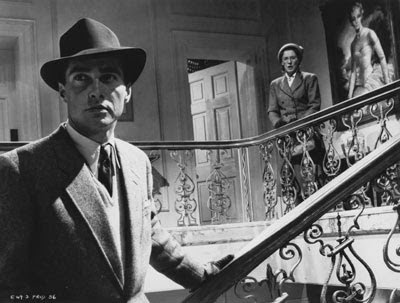 The story was adapted for the screen by Hitchcock's wife, Alma Reville, from a novel by Selwyn Jepson (Man Running, 1948), with assistance from Whitfield Cook - rumoured in some quarters to have had an affair with Alma. Jepson's book was based on a real case, that of lovers Edith Thompson and Frederick Bywaters who were executed for the murder of her husband Percy on 3rd October 1922 after a night out at the Criterion Theatre, Piccadilly Circus. Hitchcock had expressed interest in making a documentary about the pair but settled on Jepson's fiction after contemporary reviewers suggested it might make an excellent Hitchcock picture. He told Truffaut:

“What specifically appealed to me was the idea that the girl who dreams of becoming an actress will be led by circumstances to play a real-life role by posing as someone else in order to smoke out a criminal.”

Hitch had dealt with theatreland homicide before in Murder! (1930) while the slippery nature of identity and its misuse for performance or deception are themes that recur again and again in his work, from James Stewart's sicko, Pygmalion-style makeover of Kim Novak in Vertigo (1958) to the confusion over Henry Fonda in The Wrong Man (1956) or Cary Grant in North By Northwest (1959) and Anthony Perkins dressing up as his own dead mother in Psycho (1960). The killer here wears a mask of strained innocence for much of the film before he's finally backed into a corner and forced to reveal himself, recalling Joseph Cotten's Uncle Charlie from Shadow of a Doubt (1943) and anticipating Norman Bates. Other recurring Hitchcock tropes present in Stage Fright include its having a heroine romantically involved with a policeman and a memorable fairground scene (featuring Joyce Grenfell as the wacky proprietress of a duck-shooting stall), which looks back to the silent prizefighting melodrama The Ring (1927) and forward to his next film, Strangers on a Train (1951). Hitch's own daughter, Patricia, appears in the film and was studying at RADA herself at the time, which probably gave her parents an idea or two. 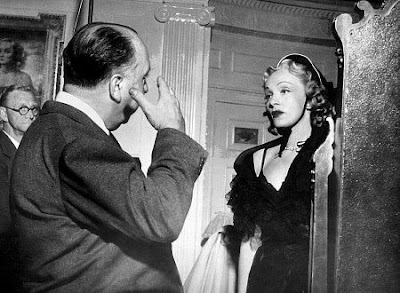 Wyman (a recent Oscar winner for Johnny Belinda, 1948, and fresh from divorcing Ronald Reagan) carries the film extremely well although Hitchcock claimed her vanity prevented him from making the most of her second role as “Doris Tinsdale”, as she refused to look too dishevelled in disguise so as not to be outshone by Marlene Dietrich. The latter steals every scene she's in, moans a path through Cole Porter's 'The Laziest Gal in Town' and is exquisitely photographed throughout, having commandeered cinematographer Wilkie Cooper all for herself in order to ensure she was properly lit. She also had an affair with co-star Michael Wilding (a future Mr Liz Taylor and returning from Under Capricorn, 1949, to play Wyman's second love interest, the kindly Detective Inspector Wilfred O. Smith), which caused further disruption on a London set Hitch felt alienated from after 11 years away in Hollywood. Although the result is never thrilling exactly, Stage Fright is suitably theatrical, well played, contains a few nice moments of suspense and one major cinematic coup - introducing the concept of the unreliable flashback, the subversion of a device audiences had come to trust implicitly as an honest plot explainer. Contemporary punters resented being lied to and Hitch later admitted it was “very indirect” but I certainly found myself wrong-footed by it.
Posted by Joe at 11:00