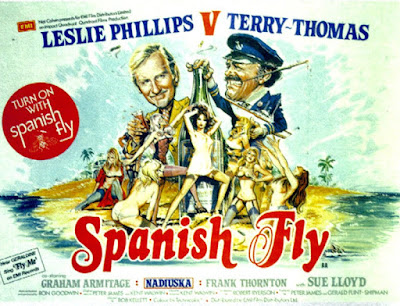 Here's a truly asinine sex comedy from the clueless cinematic wasteland that was mid-seventies Britain. After the promising New Wave of Saturday Night & Sunday Morning (1960) and Billy Liar (1963) had crashed on the rocks of Beatlemania and the Pop Revolution, this sort of bawdy idiocy was almost all anyone could come up with (until the Pythons graduated from television) in a landscape dominated by the never-ending Carry On and James Bond franchises. Here, old rogues and real-life Ibiza neighbours Leslie Phillips and Terry-Thomas (by far the more dignified and amusing of the two) are pitted against one another on holiday in Minorca. The former's lingerie entrepreneur is in town for a photo shoot with a bunch of implausibly horny models while the latter is attempting to make a killing by buying up nasty local wine to sell back in Blighty. However, when the drop turns out to be too disgusting even for that, Thomas's Sir Percy instructs his enterprising valet Perkins (Graham Armitage) to experiment with whatever ingredients he can find to try and redeem it. Accidentally adding the titular fly to one batch, Perkins and Sir Percy realise they've created a powerful aphrodisiac, which naturally leads to a healthy dollop of soft-core smut involving Phillips and his free-spirited Eurotrash until the side-effects kick in and the whole island goes, quite literally, barking mad.

A film so crass it might as well have been called, Look, Tits! Bob Kellett's dire comedy is incompetently directed and contains any number of gratuitous scenes, inserted seemingly at random, in which topless girls gyrate around on the beach to naff instrumentals while Phillips leers and winks and rubs his hands together in feigned glee. A gay photographer (Ramiro Oliveros) drinks some of Thomas's unholy brew and instantly goes straight: “Oh well, at least it solved his problem,” observes Phillips. It really is that bad. The whole thing reeks of sweaty, business class lechery but the panama-hatted Thomas is at least a highlight, clearly enjoying the sun and lecturing Perkins on the vital role played by gin-and-tonics in the march of the British Empire and otherwise doing a greatest hits package of his most popular catch phrases (he was gravely ill with Parkinsons' disease by this point). His ever-optimistic biographer Robert Ross acknowledged that Spanish Fly was both "badly written and sloppily directed" but somehow managed to find "something quietly magical about the film" in amongst all the dross. I don't see it myself and Phillips in particular is utterly ghastly as a wannabe Hugh Hefner in Speedos. What an absolute shower!