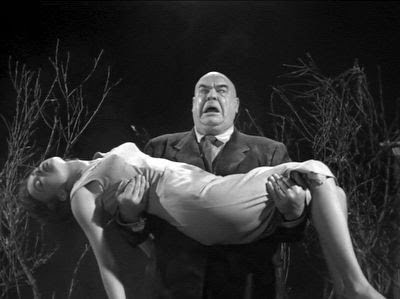 "Plan 9? Ah yes, Plan 9 deals with the resurrection of the dead. Long distance electrodes shot into the pineal and pituary glands of recent dead."
- The Ruler

With a scheme that good, it's got to be ninth time lucky for the Ruler and his gang up at Space Station Seven. Hasn't it? Surely this time, after eight false starts, the earth will be theirs and the Pentagon reduced to a smouldering heap of rubble by lunchtime? I mean, they've got an elderly man, his deathly pale wife and a burly 400 pound police Inspector wandering around a very foggy San Fernando cemetery with their arms outstretched. It's no picnic invading a planet but Plan 9 can't lose. Can it?!


Legendary Z-movie auteur and transvestite angora-fetishist Edward D. Wood Jr never lived to see his work hailed affectionately as "the worst of all time." Championed today in the wake of Tim Burton's loving tribute Ed Wood (1994), starring Johnny Depp, Wood's career actually staggered on long after the period documented in that film, his once-irrepressible zest drained away and his output increasingly sleazy, desperate, exploitative and pornographic. After the "glories" of Glen Or Glenda (1953), Jail Bait (1954), Bride Of The Monster (1955) and Plan 9, his biggest successes were screenplays for shlock movies about teenage girl gangs (filmed as The Violent Years by William Morgan in 1956), a gorilla being reincarnated as a woman (Adrian Weiss's The Bride & The Beast, 1958) and hillbillies marrying child brides (Boris Petroff's Shotgun Wedding, 1963), plus a host of lurid directorial efforts of his own with titles like The Sinister Urge (1960), Orgy Of The Dead (1965), Necromancia (1972) and Fugitive Girls (1974). A prolific typist, Wood also wrote a number of smutty pulp novels to supplement his income but was well and truly washed-up by the time of his death in 1978, depressed, alcoholic, regularly evicted and crippled with financial worries. Then, suddenly, posthumous recognition came two years later when the publication of Michael and Harry Medved's book The Golden Turkey Awards coincided with Plan 9 winning the top prize at New York's Worst Film Festival of 1980. A cult hero was born.

It's easy to mock the continuity errors, leaden acting, woeful dialogue, laughable production values and recurring patio furniture of Plan 9 but Wood's "pride and joy" has more heart than a thousand summer blockbusters. I'd take his amiable brand of technical ineptitude over aggressively marketed, the-President-saves-the-world bullshit like Independence Day (1996) any time. Yes, the editing is atrocious, especially in the many scenes that switch between night and day seemingly at random. Yes, the cardboard gravestones wobble. Yes, the military stock footage is obvious. Yes, the flying saucers are clearly toy models on strings. Yes, the co-pilot's still reading the script in the cockpit scene. And yes, it was ridiculous to try and cover for the death of Bela Lugosi by using Ed's chiropractor (Dr Tom Mason, a clear foot taller than the Hungarian ham and reduced to holding a cape over his face). But it's all so joyous. My favourite bit is when Tom Keene, playing the apparently deeply misogynistic Colonel Tom Edwards, visits the Trent house and completely ignores Mona McKinnon's greeting, then neglects to shake her hand and then sits with his back to her, before snarking about "modern women" with the lieutenant in a later scene.

Undoubtedly one of the most interesting aspects of Plan 9 is the kooky gaggle of misfits that made up the cast and crew, shooting over a five day period in November 1956 at downtown L.A.'s Quality Studios, next door to Ed's favourite Martini haunt, Gold Diggers. Its executive producer and financier was a devout member of the First Baptist Church of Beverley Hills named J. Edward Reynolds, who also appears as one of the grave diggers. As shown in Burton's biopic, he was Wood's landlord and was conned into helping bankroll his tenant's venture, then called Grave Robbers From Outer Space, with the promise of making enough profit to fund a series of Biblical epics, which, naturally, never happened. Wood and several of the cast also had to agree to be baptised before Reynolds and friends would put up the dough (the final budget amounting to around $20,000 in total). Reynolds would later die of a heart attack induced by his excessive consumption of mayonnaise, a story told by fellow church-goer and actor Gregory Walcott - almost a parody of the square-jawed leading man as pilot Jeff Trent in a part that Reynolds had won for him ("I can't say a word - I'm muzzled by army brass!").

Among the "aliens" we see in Plan 9 (there was no time or money for elaborate make-up) are failed transsexual and socialite John "Bunny" Breckinridge as the ultra-camp, world-weary extraterrestrial ruler, future television writer Joanna Lee and the brilliantly monikered Dudley Manlove as the proud, prissy Eros, all suffering in shiny faux-medieval tunics designed by a certain Dick Chaney (surely no relation...). Paul Marco would play the cowardly comic relief cop Officer Kelton three times in Ed Wood projects, also donning the badge in Bride Of The Monster and Night Of The Ghouls (1959). Along with the dying Lugosi, Tor Johnson, Vampira and Criswell, actors Duke Moore and Conrad Brooks ("the John Gielgud of bad movies") were part of Wood's regular stock company, as was cinematographer William C. Thompson, who actually manages to get some beautifully lit, almost noirish exterior shots into the finished film despite being blind in one eye and completely unable to see colour. 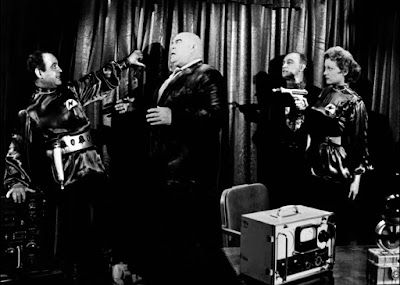 Gurning zombie Johnson had been a pro-wrestler, nicknamed "the Super Swedish Angel", and had previous film experience playing, er, a wrestler, Tosoff, in W.C. Fields' film The Man On The Flying Trapeze (1935). He would later be immortalised through a best-selling latex Halloween mask designed by the Don Post company in 1965 and a comic strip serial by cartoonist Drew Friedman. Johnson also once appeared as a contestant on Groucho Marx's quiz show You Bet Your Life with hilarious results.

Vampira too had Scandinavian roots. A Finnish immigrant whose real name was Maila Nurmi, she found fame in 1954 when she won a best costume contest at a Hollywood masquerade ball and was then invited by the KABC-TV network to introduce late night horror movies - something she did with great style, awful puns and lashings of dry ice. She is said to have had a relationship with James Dean and went on to own an antique jewellery store and front her own band, Vampira and Satan's Cheerleaders, before launching a $10 million lawsuit against Elvira, Mistress of the Dark (Casandra Peterson), for stealing her act, which ultimately proved unsuccessful. Well, she had stolen the idea from Charles Addams herself, after all. Vampira could not drive and Ed had no money for a cab, let alone a chauffeur, so she really did have to ride the bus to the studio in full costume for the shooting of Plan 9, as shown in Ed Wood.

As for the Amazing Criswell, the film's psychic narrator, he was a mortician's son who had been a radio newscaster in New York, making up wild prophecies to fill excess airtime. His own show, Criswell Predicts soon followed on a local L.A. TV station, along with a syndicated newspaper column and several more appearances in Ed Wood misadventures. Most of his outlandish, sensational predictions fell flat - including the outbreak of mass cannibalism in Pittsburgh, the complete destruction of Denver and the Presidency for his friend Mae West - but he did successfully call the assassination of J.F.K. and claimed an 87% accuracy rate anyway. Criswell was genuinely close to Wood and would be present at the director's funeral to watch his ashes being blown out to sea.

Some have suggested that Plan 9 From Outer Space is, in actual fact, not a bad film at all and really a semi-serious attempt at an "anti-masterpiece". Ed Wood's magnum opus is certainly an exuberant example of guerrila filmmaking for the sheer love of the game and is also credited with introducing the concept of "symbolic special effects": we can plainly see that they're cheapo fakes but it doesn't matter because they succeed in conveying the idea anyway. Surely any work of art that remains a genuinely engrossing experience and continues to generate interest, affection and legions of new fans over half a century after its initial release can't really be the worst in its field?