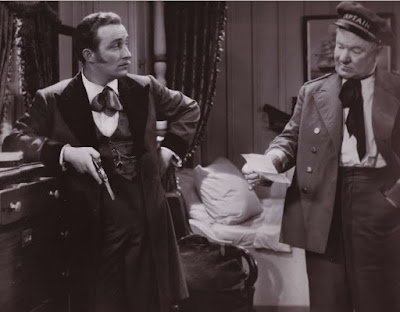 Critic Judith Crist wrote in 1972 that W.C. Fields was, "an American Falstaff at war with the twentieth century." It's a great description and one born out by how at ease the Great Man appears to be here in the late nineteenth. This time Fields plays Commodore Jackson, a boastful, cheating showboat owner and gambler, sailing merrily down the Big Muddy with a glass in his hand, a cigar at his lips and a bevy of tall stories percolating on the stove, ready for an impressionable crowd (gamely provided by Fields regular Jan Duggan). When the paddle steamer docks near the Rumford plantation mansion, Jackson wanders in on an engagement party for elder sister Elvira (Gail Patrick) and her crooner beau Tom Grayson (Bing Crosby), a Northerner and ward to Mark Twain-alike General Rumford (Claude Gillingwater Sr). When love rival Major Patterson (John Milijan) challenges Tom to a duel of honour, Grayson refuses on pacifist grounds. Branded a coward, he is outcast from the family and signs up with Jackson, much to the anguish of cute younger sister Lucy (Joan Bennett), who has secretly been in love with Tom all along. Naturally, it all ends well with Tom accepting the necessity of standing up to Patterson in order to get the girl. Mint juleps all round! 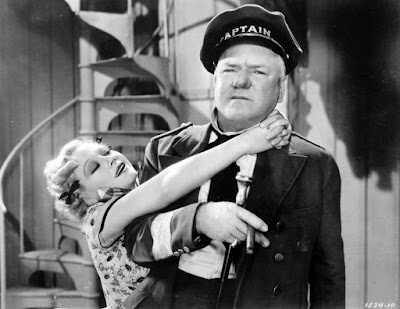 Comedy journeyman A. Edward Sutherland directed this sumptuously costumed little beauty for Adolph Zukor's Paramount with uncredited help from Wesley Ruggles. The story comes from Magnolia (1923), a play by Booth Tarkington who also wrote The Magnificent Ambersons (1918), famously filmed by Orson Welles as his follow-up to Citizen Kane in 1942. Magnolia had been shot twice before in the silent era as The Fighting Coward (1924) and River Of Romance (1929). As a portrait of the prelapsarian grandeur of the Old South, Mississippi ticks off all the obvious references and presents the potentially fraught subject of race relations in a cosy light. Fields peddles a black children's choir called the "Inky Kids" but is kind to them and Bennett is on friendly terms with her maid. W.C. never tires of telling people about the time he ran into a tribe of Indians ("I unsheathed my Bowie knife and cut a path through a wall of human flesh!") but is regularly interrupted with doubts about the historical accuracy of his yarn and is ultimately sent running scared by a shipment of wooden cigar store Indians. His casual racism towards "red skins" is thus deliberately undermined by his cowardice but would have been nothing unusual for the time, also recurring in My Little Chickadee (1940), another costume piece.

The setting aside, this is comfortable territory for Fields. He had caused havoc on a boat before in Tillie & Gus (1933) and would do so again in The Big Broadcast Of 1938. He had often tackled a snooty family's objections to a young couple's union in films like You're Telling Me! and The Old Fashioned Way (both 1934) and would return to the theme in Poppy (1936) and You Can't Cheat An Honest Man (1939). He's clearly in his element here and, according to biographer Robert Lewis Taylor, "Fields had real affection for Bing Crosby, his neighbour [in Los Angeles] and occasional companion. In turn, Crosby had an idolatrous, filial attitude towards Fields, whom he always called 'Uncle Bill'." Apparently Eddie Sutherland approached Crosby on set with the warning: "See here, Bing. I'm worried about this thing. Bill Fields is walking off with it. The old devil's stealing every scene." Bing assured his director, however, that he didn't mind at all if it was good for the picture - a generous way of looking at things, but then Crosby was no slouch at playing the jovial straight man, sparring regularly with the likes of Groucho Marx and Jack Benny on radio for years. Fields would also star alongside Bing's regular Road To... (1940-62) co-stars, Bob Hope and Dorothy Lamour, in The Big Broadcast Of 1938.

Crosby does a splendid job here as the gentle Tom Grayson, repackaged by Fields as, "the Notorious Colonel Steele, the Singing Killer." An exaggeration - his songs aren't that bad. In fact, they're all by Richard Rogers and Lorenz Hart and are included below. There's a swell running joke begun early on when Fields objects to someone singing 'Swanee River', complaining that it'll never catch on because the tune isn't memorable, only to find that he can't get it out of his head for the rest of the film. Both men also get a fair bit of action to play. Crosby's brawl with debt collector Captain Blackie (Fred Kohler) after he interrupts a performance is suprisingly violent and physical while Fields' wild knife throwing practice frequently threatens to decapitate poor showgirl Queenie Smith.