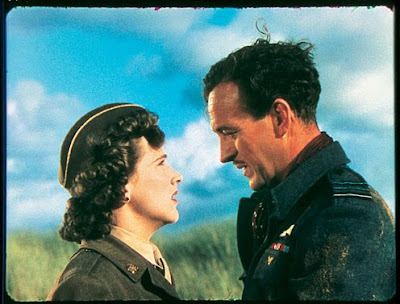 A frequent intruder on those incessant “100 greatest films of all time” lists, Michael Powell and Emeric Pressburger's much-trumpeted wartime fantasy is one of the most preposterously whimsical, winsomely saccharine romances I've ever ground my teeth through. The plot hinges on a celestial book-keeping error, compounded by thick Channel fog, which allows British WWII airman Peter Carter (David Niven) to miraculously survive the Lancaster bomber crash that should have killed him, falling in love with June (Kim Hunter), an American radio operator, on the way to bailing out sans parachute. To rectify the mistake, a heavenly court is convened to hear Peter's case.

Like a reverse Wizard Of Oz (1939), Powell and Pressburger have Jack Cardiff shoot the real world in bright, sickly Technicolor while heaven is portrayed as a humourless, colourless, modernist bureaucracy, populated by hordes of lawyers, file clerks and receptionists apparently busy catering to the best-attended national stereotypes convention in history. Dignified Hindu and Gurkha soldiers, solemn black Americans, starchy nurses, moustachioed R.A.F. pilots, sour New England Puritans - no wonder Niv's so keen to cheat death. While the afterlife looks thoroughly unappetising, the filmmakers then entirely squander their premise by shooting the Technicolor world almost entirely in ugly interiors. After a bright opening in which a confused Peter staggers around the sand dunes of a windswept Devon beach and goes on a dreamlike first date with June in a rose garden, the rest of the film's terrestrial scenes largely take place between Dr. Reeves' (Roger Livesey) cluttered study and a sterilised army operating theatre (whose idea was it to put a brain surgery scene in this lavish schmaltz anyway?) Yuck.

Another wasted conceit occurs at the trial. The script is at pains to stress that Carter can choose anyone in history, anyone at all who has ever lived and died, to represent him. He is free to pick from the finest minds humanity has to offer, from the greatest classical orators, thinkers and philosophers to the wisest of politicians, artists, theologians and scientists. So who does he plump for? Plato? Shakespeare? Schopenhauer? No, dear old Dr. Reeves. And you know what that means. The poor bastard has to die. And how do Powell and Pressburger engineer this tragic turn of events? By having poor old Roger Livesey thrown off his motorcycle in a torrential downpour and burned to death horrifically by the roadside. Nice. Couldn't he have just slipped away peacefully in his sleep? For some reason, the writers almost completely reject the idea of populating heaven with identifiable historical figures – John Bunyan does get a cameo – but it's not at all clear why. Surely a guest appearance by someone playing Laurence Sterne or Fats Waller wouldn't have hurt? Anyone would have been better than Archers repertory player Marius Goring's increasingly irksome French fop, quite understandably decapitated by the revolutionaries for being too decadently twee (think Lumiere from Disney's Beauty & The Beast without the grit). That he is said to smell of fried onions comes as little surprise. 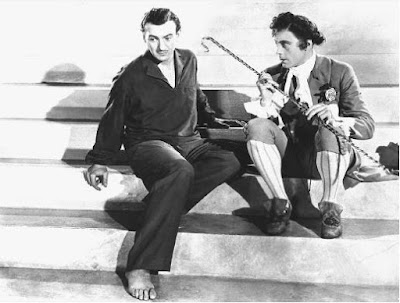 A Matter Of Life & Death is full of these sort of bewildering judgement calls and unanswered questions. Did the filmmakers sincerely believe that all it would take for them to be hailed as “literary” was by having almost every character recite poetry? Did they really think that getting their actors to freeze whenever an angel appears was anything other than an appalling drama school gimmick? Hunter visibly corpses at one point, unable to hold her pose completely still, as though suddenly struck by the absurdity of it all. And why oh why have the trial descend into an idiotic, Transatlantic pissing contest between Livesey and Raymond Massey's Abraham Farlan? The film was commissioned by the Ministry of Information to boost Anglo-American relations post-war - how exactly is this end served by having Massey sneer at boring radio cricket commentary and Livesey declare himself bemused by R&B? The list goes on. What's the deal with the misspelt barracks production of A Midsummer Night's Dream that never happens? Is this a metaphor I see before me? And WHY is the heavenly judge played by the same actor (the magnificently eye-browed Abraham Sofaer) who appears as Peter's neurosurgeon? Is the old sawbones a ghost then? An angel? Or is the entire trial and the silly magical escalator just a figment of Peter's fevered unconscious imagination? Frankly, I gave up caring long before we got there. Niven, Livesey and Massey are all very well but who honestly gives a damn about the fate of the utterly anonymous Kim Hunter? A contemporary reviewer in Variety hit the nail on the head when he wrote that, "Like other Powell-Pressburger pictures, the striving to appear intellectual is much too apparent." A Matter Of Life & Death is a bold venture, certainly, but a most vexing one nonetheless.
Posted by Joe at 09:20