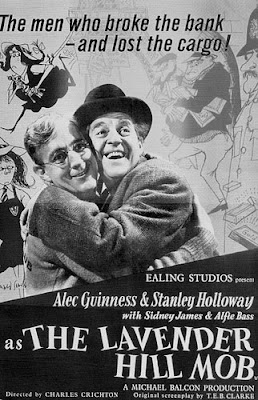 This charming Ealing caper stars Alec Guinness as Henry Holland, a meek London bank clerk responsible for overseeing the transfer of gold ingots from the foundry to the city vaults. When a new lodger moves into his sleepy boarding house home in Battersea, Holland befriends the man, Alfred Pendlebury (Stanley Holloway), and learns that he is a sculptor who makes a living designing and manufacturing souvenir nicknacks. Together they hatch an ingenious plan to hijack the bank's bullion van on Holland's watch, melt down the gold and reshape it into miniature statuettes of the Eiffel Tower for shipment to Paris, where it can finally be sold on the black market. But they'll need help and, as always, the best laid plans of mice and men often go awry. 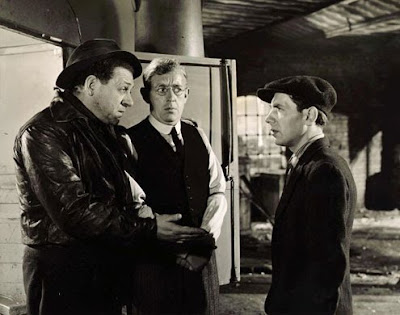 Making Hitchcockian use of le tour Eiffel and a series of more unusual locations, including a girls' primary school and a police training college in Hendon, The Lavender Hill Mob largely takes place in a bomb-damaged capital slowly getting back on its feet after the war. Some have noted the influence of Italian neo-realism over Michael Balcon's Ealing during this period, as many of the studio's comedies shared the then topical theme of ordinary citizens being driven to crime in response to economic adversity. That's very much the case here, as amateur crooks Guinness and Holloway call in professional cockney hoodlums Sid James and Alfie Bass to help execute their heist. Others have read into the foursome's trusting relationship a political allegory for Clement Attlee's Labour government but that seems like stretching a point to me.

As he would later do to such great effect playing George Smiley in a brace of splendid John Le Carré adaptations for the BBC (1979, 1982), Guinness hides a deviously cunning, calculating brain behind a mask of phlegmatic officialdom. No one suspects fastidious, dependable old Henry Holland after 20 years of loyal service. His late-blossoming bromance with Holloway is sweet and beautifully evoked in the scene in which they race down a spiral staircase at the Eiffel Tower, laughing hysterically together and discarding hats and coats as their masterplan threatens to unravel at the hands of a group of giggling schoolgirls. The tender portrayal of their friendship seemed to me to be a clear influence on the unlikely criminal syndicate at the centre of Robert Asher's later Make Mine Mink (1960). The film also features a thrilling chase in a stolen police car, an original set-up that allows Guinness and Holloway to thoroughly bamboozle their pursuers by issuing misleading, contradictory instructions over the radio. In fact, the authorities are mocked throughout The Lavender Hill Mob and this particular scene spoofs Ealing's own police propaganda film The Blue Lamp (1950), which was also scripted by T.E.B. Clarke, featured Dirk Bogarde in an early role and introduced the world to Jack Warner's Dixon of Dock Green. 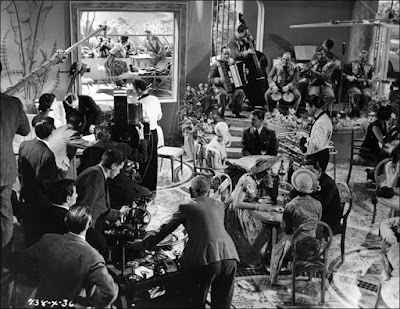 A cast of familiar faces in small character parts includes Sydney Tafler, Edie Martin, Marjorie Fielding, John Gregson and even a young Audrey Hepburn in the opening Rio scene (though she doesn't appear in the on-set picture above). Hepburn would be promoted from extra to cigarette girl that same year when she appeared in Mario Zampi's Laughter In Paradise and things could only get better from there. Clarke won an Oscar for his ingenious screenplay though Guinness lost out on Best Actor to Gary Cooper for High Noon (1952). Amazing to mark the difference between US and British output at that time. Director Charles Crichton, also responsible for two other celebrated Ealing odes to amateur pluck, Hue & Cry (1947) and The Titfield Thunderbolt (1953), was dredged out of retirement by John Cleese in 1988 to helm A Fish Called Wanda. Listen out too for the film's score by Frenchman Georges Auric, who would also contribute the music for a number of Ealing films including Passport To Pimlico (1949).
Posted by Joe at 09:56