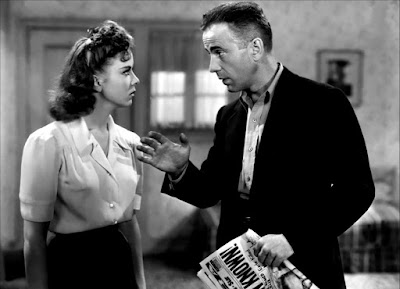 Bogie stars as “Mad Dog” Roy Earle, a career criminal released from prison with a governor's pardon after his old boss pulls some strings among influential friends. On the outside, Earle dreams of “crashing-out” and returning to his roots as an Indiana farm boy but is soon summoned to front a hotel robbery instead by his former paymasters. Doom beckons.

“He calls the tune and you dance to it,” crooked ex-cop Barton MacLane warns Bogart early on in High Sierra, in reference to dying crime lord Big Mac (Donald MacBride, rather than the giant talking hamburger you might have been expecting). This is a reminder that Roy Earle is a free man in name only. He may find himself outside the prison walls, for now, but he's still “owned” by the associates who sprang him. Roy knows it. It's carved on to his gaunt, weary old face like a valentine into a tree trunk. He knows he'll never be truly free so long as he carries this debt and seems almost to be willing his own destruction in order to break it. There's a half-heartedness to the Tropico hold-up when it finally takes place and an inevitability about the final show-down in the mountains. Roy even seems to be toying with death when he's forced to run his car off the highway to avoid hitting a startled jack rabbit (N.B. director Raoul Walsh actually lost the sight in his right eye when just such an accident happened to him in 1928). That's why Roy's so reluctant to throw in his lot with Ida Lupino's resilient but bruised gangster's moll Marie and Pard, the bad luck terrier. Trying for a straight life with a patched-up family just feels hopeless. He'd rather hang on to a dream he knows is impossible and therefore can't hurt anyone else, that of marrying Velma (Joan Leslie), the club-footed girl he's in love with because she reminds him of the Corn Belt childhood he longs to return to. At least that way he can savour the heartache and disillusionment of rejection. Doc Banton (Henry Hull), quoting John Dillinger, tells Earle that men like him are “just rushing towards death.” But only in death can this buzz-cut con find the freedom he seeks, something Marie comes to realise as she stares down through her tears at his stricken form, lying beneath the pines, cordoned off by police tape. 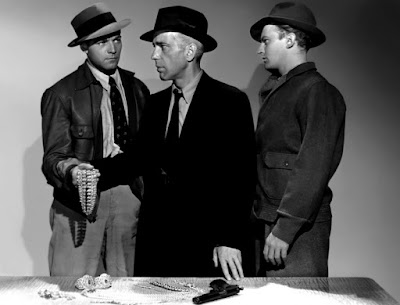 The law-abiding society Roy Earle rejects is epitomised – for novelist W.R. Burnett, writer John Huston and director Walsh – not by the kindly Ohio grandfather (Henry Travers) he befriends but by the ungrateful, egocentric tart Velma becomes, with her prissy fiancé and drunken friends. It's the pushy man who crashes into Pa's car without signalling and then threatens to sue. It's the wealthy, dumb Californian hypochondriacs the doc makes a living disabusing of their vain notions. The sublime natural splendour of the Sierras seems to mock the people living so unhappily within its shadow. Roy implicitly recognises this and retreats there to die. He has tried to right the wrongs of the broken world he found beyond the bars as best he can – intervening in Pa's argument, hiding Mac's booze from the doctor to ensure the old man doesn't lose his last remaining pleasure, arranging Velma's surgery, beating up the hood who slapped Marie around – but it's all for nothing in a cruel, cruel, unforgiving universe. 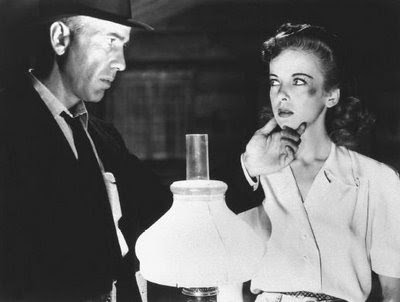 Jack Warner wanted Paul Muni for High Sierra and the script was also sent to George Raft (as per usual) before Bogart got his hands on it and made Mad Dog his own. This was the last time he would play a gangster after dedicated service throughout the thirties and the part paved the way for his playing smart, chippy types on the right side of the law. His relationships here with Lupino, Travers and Pard (actually Bogie's own dog, Zero) are touching and real – though his third wife Mayo Methot grew increasingly jealous and difficult about Bogart's on-set friendship with his leading lady (Lupino appearing with Bogie for Walsh a second time after They Drive By Night, 1940). The project was given a huge boost when Hal Wallis brought in flamboyant journalist Mark Hellinger as his associate producer, a man of spivy clothes and loudly boasted mob connections. His short story 'The World Moves On' had been made into The Roaring Twenties by Walsh two year earlier, starring Jimmy Cagney and Bogart, and Hellinger was instrumental in ensuring that Burnett's story remained a subtle, brooding character piece rather than a dumb cops-and-robbers affair. The inclusion of Algernon (Willie Best), a bug-eyed, narcoleptic racial stereotype, as handyman to the gang's hideout wasn't such a hot choice of comic relief but then hindsight is a wonderful thing. High Sierra's climactic car chase almost has the beating of the one in The Bank Dick, released the previous year.

Another individual deserving of special mention is stuntman Buster Wiles, who rolled 90 feet down a mountainside in Bogie's place, only to ask to if he could do it again and be told, “Forget it. That's good enough for the 25 cent customers.” Wiles also stood in for the police sharp shooter on the ledge above, thereby effectively assassinating himself with the bullet that finally puts Mad Dog down. High Sierra was remade twice: as Colorado Territory, a Joel McCrea Western in 1949, and again in 1955 as I Died A Thousand Times, starring Jack Palance as Roy Earle.