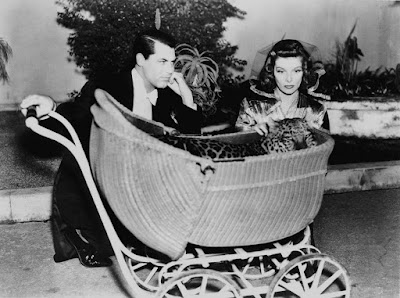 An increasingly overwhelmed palaeontologist (Cary Grant) and an extremely scatty heiress (Katharine Hepburn) find themselves forced into an impromptu leopard hunt in darkest Connecticut in Howard Hawks's breathless, madcap screwball classic, surely one of the funniest, most joyous films ever to wrap and a work of art that has contributed more than most to the planet's Gross Human Happiness and the general greater merriment of the species. From the very first moment, as Bringing Up Baby's opening titles rear up on screen, it's hard to stop a sappy, idiotic grin from stretching itself out across your face and why would you want to?

Both leads are on priceless form but it's Hepburn who's the real revelation. Unfairly labelled “box office poison” at the time after a string of commercial failures (of which this was the last), Hepburn found a winning formula in teaming up with Cary Grant. They had appeared together once before in George Cukor's Sylvia Scarlett (1935) and would be reunited for a second time in 1938 in Cukor's Holiday (1938), before Hepburn's big triumph two years later in The Philadelphia Story (1940), a popular Philip Barry play to which she owned the rights and which found Grant joined by Jimmy Stewart in the battle for her hand. Here, as there, Hepburn is on hysterical form, a born comedienne absently stealing golf balls and purses, crashing cars, flipping olives, marching around with her underwear showing, falling into rivers, impersonating gunmolls and serenading the titular wildcat with 'I Can't Give You Anything But Love'. Grant's growing exasperation is also a treat and he gets to appear in a fruity dressing gown, remarkably managing to keep his dignity in drag just as he would in 1949's I Was A Male War Bride, again at Hawks's instigation. This versatile director, using a motor-mouth script by Dudley Nichols from a Hagar Wilde short story that had first been published in Collier's Weekly the year before, seemed to create masterpieces wherever he turned, from Westerns like Red River (1948) and Rio Bravo (1959) to crime pictures such as Scarface (1932) and The Big Sleep (1946). Bringing Up Baby, along with the later newsroom romp His Girl Friday (1940), again starring Grant, essentially defined the screwball romantic comedy. As writer James Monaco wrote in Sight & Sound in 1974, Hawks's key trait was his "oblique three-cushion dialogue", which resulted in his producing films "almost better to listen to than to watch". Monaco goes on to suggest that, "Outside of the Westerns, very few images in Howard Hawks films are striking; it is the dialogue we remember. More than anyone else, Hawks made 'talkies'". 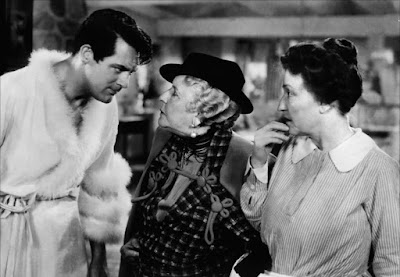 Aside from the leads, also well deserving of a mention for their performances in Bringing Up Baby are Barry Fitzgerald (Michaleen from The Quiet Man, 1952) as a tippling Irish gardener, Charlie Ruggles and May Robson as the delightful, loon-imitating Major Applegate and his no-nonsense dinner date Aunt Elizabeth respectively, plus Walter Catlett as an easily sidetracked and arrest-happy small-town police constable. Special notice too to George, the wire-haired fox terrier played by Skippy, a canine thespian who also starred as Asta in the popular thirties Thin Man detective series with William Powell and Myrna Loy. George, described by Robson as “a perfect little fiend”, clearly had a ball snatching and burying the “intercostal clavicle” Grant needs to complete his brontosaurus skeleton (submerging it somewhere in a 26 acre lawn alongside his prized collection of old boots) before scurrying off to wrestle Baby. Fearless stuff.
Posted by Joe at 09:25