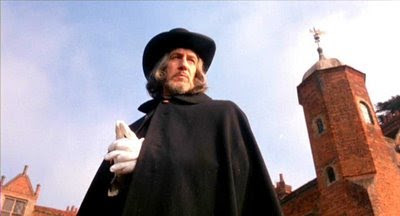 Something wicked this way comes. Vincent Price stars as Matthew Hopkins, a ruthless profiteer roaming the English countryside in 1645 and exploiting the unrest, superstition and paranoia of the ongoing civil war to make a tidy sum "purging" rural communities of those unfortunate innocents accused of witchcraft. Arriving in Brandeston, Suffolk, Hopkins and his sadistic henchman John Stearne (Robert Russell) proceed to torture and hang a local priest, John Lowes (Rupert Davies), charged with "papistry" and rape his niece Sara (Hilary Dwyer). When Sara's fiancé Richard Marshall (Ian Ogilvy), a Roundhead trooper, learns of these atrocities, the young soldier sets out in search of Hopkins and Stearne, vowing revenge.

Witchfinder General, a sort of British Western, can be seen in hindsight as part of a loose "folk horror" trilogy along with Piers Haggard's Blood On Satan's Claw (1971) and The Wicker Man (1973). It is most famous for being the third and final film by director Michael Reeves (after Revenge Of The Blood Beast, 1966, and The Sorcerers, 1967), who was just 24 when he made it and 25 when he died a year later from an accidental overdose of barbiturates. Lord knows what he might have achieved had he lived but it's rumoured that Peter Fonda offered him the keys to Easy Rider (1969). His cinematographer, John Coquillon, went on to lense Sam Peckinpah's Straw Dogs (1971) in Cornwall as well as Pat Garrett & Billy The Kid (1973) and Cross Of Iron (1977). Reeves was certainly talented and turned in a small masterpiece here of brutal, matter-of-fact violence, mob hysteria and autumnal gloom. The director, who also co-wrote the script with Tom Baker based on a heavily fictionalised history by Ronald Bassett, had Donald Pleasence in mind as his first choice to play Hopkins, conceiving the character as an absurd, delusional chancer. When horror maestro Vincent Price was brought in instead, Reeves had to reconfigure Hopkins as more perverse, threatening and unknowable. Indeed, Price and Russell on horseback look like nothing so much as a demonic Don Quixote and Sancho Panza, casting long shadows over East Anglia and leaving behind the fear of god and a trail of charred corpses in their despicable wake. It's one of Price's best-ever and most toned-down performances, although he feuded constantly with his director on location. Price: "Young man, I have made 84 films. What have you done?" Reeves: "I've made two good ones." 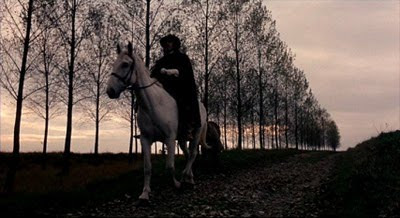 There is not the slightest hint of the supernatural at any point in Witchfinder General. Accusations are made only in terror or to settle old scores, confessions are extracted through agonising torture and sleep deprivation. Matthew Hopkins appears to be neither a Royalist nor a Parliamentarian sympathiser. He is an opportunist taking advantage of the collapse of social order and rife religious mania to make a name for himself. He lives vicariously through Stearne's cruelty and has no loyalties to anything but his own whims and lusts, not even god. As historian Diane Purkiss said of the real Hopkins, the Witch-Finder Generall was, "by the standards of his own times not a monster, but a product of society... Hopkins lived in a vivid, narrow, frightened nightmare of a world where witches walked by night." She describes this "godly" lawyer as "ruthlessly self-fashioning" and a man who came to fancy himself as a sort of divine forensic scientist. The inhabitants of the lawless marshland he preyed over believed it was haunted by boggarts and witches in direction communion with the devil, who bore his mark and suckled his animal familiars with their blood. The war also left many grieving widows believing their dead husbands and sons could speak to them from beyond the grave. Under John Stearne's branding iron, however, these imagined whispers were quickly declared to be the work of Satan. Hopkins actually died from consumption in 1647, aged just 27, but his on-screen death, hacked to pieces by Marshall's axe, is much more satisfying, even if the soldier's catharsis is cut short by a compassionate bullet. 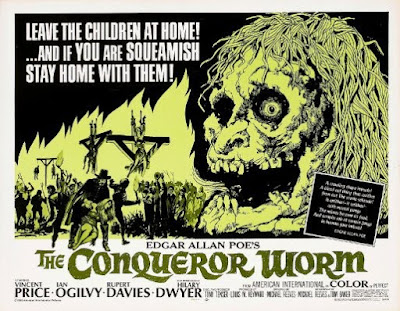 Ridiculously, Reeves' film was credited to Edgar Allan Poe when it was released in the US as The Conqueror Worm. This astounding marketing ploy, designed to reel in fans of Price's popular Poe series with Roger Corman, was tenuously justified by having the actor recite lines from the titular poem at the beginning and end of the film. How bogus can you get?
Posted by Joe at 10:23