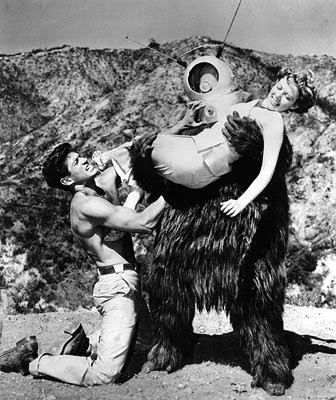 Geeks tend to fetishise the rubber-suit monster spectaculars of the fifties as cult kitsch and glory in labelling whichever is their favourite, "The Worst Movie Ever Made" (a title usually held by Ed Wood's Plan 9 From Outer Space, 1959). Personally, I find this inane, possessive, "so bad it's good" attitude towards old American pop culture to be more than a little smarmy and reductive, not to say patronising and disrespectful. The likes of Phil Tucker's Robot Monster may not be the most technically adept, well-executed or original of films but they do have bags of innocent, unironic charm, an authentic D.I.Y. sensibility and a pleasingly earnest, pretension-free desire to entertain. These films were made as cheaply as possible to draw a crowd and make money during a period when the cinema was beginning to see its supremacy challenged by television. Why not just enjoy them for what they are and in the spirit they were intended?

Director Tucker was only 25 when he made this archetypal space invader B-picture in 3D, taking just four days and for just $16,000. It made a cool $1 million but the young film-maker attempted suicide (unsuccessfully) soon after, becoming depressed after one bad review too many and a contract dispute with Robot Monster's distributor over unpaid royalties. He was later reconciled to the project, however, and recalled: "For the budget and for the time, I felt I had achieved greatness." Er, well...

The plot, so far as it goes, concerns Ro-Man, a coldly logical alien who has wiped out the human race with his "Calcinator" cosmic death ray as part of a plan to conquer earth before humanity can become "too intelligent" and begin the inevitable programme of intergalactic imperialism and enslave his home planet. However, Ro-Man hasn't reckoned on a small group of survivors - a scientist (John Mylong) and his (almost literally) nuclear family, all dosed with an antibiotic serum of the doc's own invention that has made them immune to Ro-Man's weapon. What's more, the space-ape can't help falling in love with elder daughter Alice (Claudia Barrett), carrying her off like a horny King Kong with a TV on his head. Infuriated by Ro-Man's lovesick dawdling and emotional turmoil ("At what point on the graph do 'must' and 'cannot' meet?!"), his supervisor, "The Great Guidance", zaps him dead and unleashes a swathe of reanimated dinosaurs to destroy what remains of earth, only for the whole film to be excused as a young boy's dream. But was it?

There's no Darwinian explanation for Ro-Man being a giant ape in a constantly-slipping helmet with bunny ear antennae. Tucker simply couldn't afford a decent robot costume so instead hired his buddy, George Barrows, who already owned his own monkey suit - a shame, as surely some raving about evolution gone nightmarishly wrong could have been etched in to liven up the premise. The shouty voices for Ro-Man and his angry line manager were actually performed by John Brown but Barrows continued to get regular work as a primate actor for hire, appearing in such other simian classics as Gorilla At Large (1953) and Black Zoo (1963), plus episodes of The Honeymooners (1956), The Addams Family (1964), The Beverley Hillbillies (1966), The Man From U.N.C.L.E. (1966) and Wild, Wild West (1968). The monster's lair in a Bronson Canyon cave contains some hilarious lo-tech hardware used by Ro-Man for communicating with his superior, including a bedroom dresser with a monitor on top and the "Billion Bubble Machine", a soap-spouting hi-fi mounted on a rickety wooden desk. The moment when Ro-Man, lumbering across the hillsides, runs into and strangles little Carla (Pamela Paulson) is surprisingly abrupt and brutal in spite of its happening off-camera and recalls Boris Karloff's famous turn in Frankenstein (1931). Ro-Man's co-stars are actually rather good and token hunk George Nader went on to have a semi-respectable career at Universal, even if his efforts to save Barrett here are feeble. Composer Elmer Bernstein did even better, going on to score The Man With the Golden Arm (1955), The Ten Commandments (1956), Sweet Smell of Success (1957), The Magnificent Seven (1960), To Kill A Mockingbird (1962) and The Great Escape (1963). On a sadder note, actress Selena Royale, who played the mother of the surviving family here, had her career destroyed soon after by Senator McCarthy, blacklisted as a communist for refusing to testify before his House Un-American Activities Committee. She would never work again. 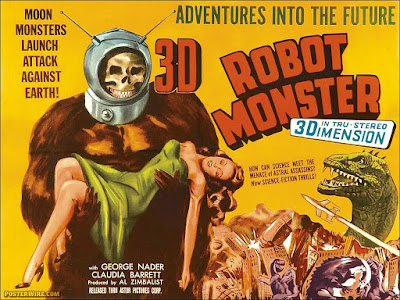 Typically, Robot Monster contains some "borrowed" footage in its 62 minute running time - mostly those incongruous scenes involving blasted cityscapes and stop-motion reptiles - spliced in from other movies like One Million B.C. (1940), Rocketship X-M (1950), Lost Continent (1951), Flight to Mars (1951) and Captive Women (1952). It may not be a stand alone masterpiece then but Robot Monster is certainly the sort of thing we should be sincerely thankful for. Tucker's film actually makes a neat job of reflecting contemporary Cold War anxieties, alluding to the fact that much of the destruction wrought upon earth was actually caused not by Ro-Man's ray but by national governments, blaming each other for the sudden spate of explosions and retaliating with h-bombs. A tip of the cap to screenwriter Wyott Ordung for that little detail. Otherwise though Ordung has a great deal to answer for by way of ludicrous dialogue and setpieces (The wedding? The dumb show?) and the fact that the poor heroine gets tied up twice. He might have been trying to say something profound here by drawing parallels between the way Roy and Ro-Man behave towards Alice but it's all too sloppy to tell, not least in the scene when the latter knocks her out cold because he can't work out how to tie a knot.