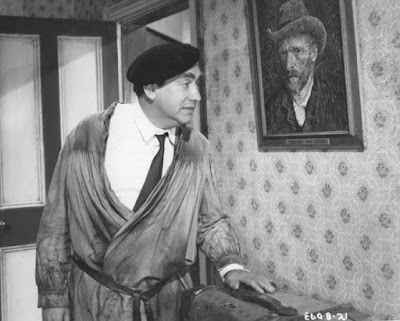 Tony Hancock stars as a bored city clerk who throws off the shackles of nine-to-five monotony and decamps to Paris's bohemian Left Bank to try his luck as an impressionist painter. Hancock is soon hailed a genius for his pioneering "Infantile" style while his Canadian roommate Paul (Paul Massie), a much more talented artist, eventually becomes jealous and discouraged, leaving town and his canvases behind, only for influential critic Sir Charles Broward (George Sanders) to spot them and assume they are Hancock's. He doesn't deny it and thereafter achieves celebrity and renown but remains secretly racked with guilt about taking credit for the younger man's work.

The opening scenes of Hancock at a Croydon station commuting to work with a bad case of the office drone's ennui are absolutely timeless and probably the film's most successful statement. Everyone must have felt that nagging "Why do I do this everyday?" feeling and Hancock's quiet desperation is beautifully articulated. His bowler hat and umbrella - which have become symbols of oppression to him - may have been part of the contemporary uniform but they are also classically surrealist everyman signifiers as seen prominently in the work of René Magritte. Only Hancock recognises the pure absurdity of mass conformism and the daily drudge all around him for what it is. This is further echoed by the desks of perfectly synchronised accountants matching each other clack for clack, stroke for stroke, page turn for page turn, the workforce as giant bureaucratic machine and a nod to Chaplin's Modern Times (1936).

The coffee shop scene featuring Hancock's regular supporting players Liz Fraser and Mario Fabrizi is also a nice bit of satire and one that has its origins in a 1956 BBC radio episode of Hancock's Half Hour entitled 'Fred's Pie Stall'. Today we're completely acclimatised to high street chains like Caffè Nero, Costa and Starbucks but in 1961 a trendy venue peddling frothy milk and faux-European sophistication would have been alien to the likes of Hancock. His later order of egg, chips and snails in one of Paris's glitziest gourmet restaurants makes a similar point about bourgeois pretensions. The French capital itself meanwhile represents a promised land here just as it did for Gene Kelly in An American In Paris (1951) and just as it does for Jenny in the more recent An Education (2009), in which Carey Mulligan's schoolgirl also longs to exchange drab English suburbia for chic fashions and the Seine. 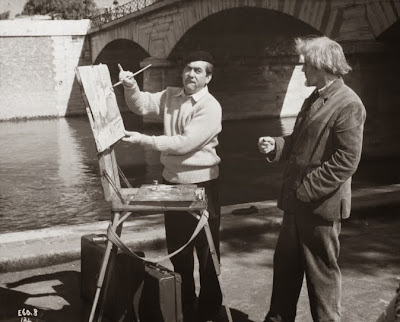 In truth, the English sequences are the best moments of The Rebel, a film essentially spun off from another old episode of Hancock's Half Hour, 'Michaelangelo 'Ancock'. Director Robert Day and regular writers Ray Galton and Alan Simpson spend way too long mocking easy targets like French beatniks and existentialists in black polo necks and matching goatees (although Dennis Price as their leader, a Salvador Dalí figure incongruously named "Jim Smith", is a treat) and not enough deriding the hostile English philistinism represented by Hancock's boss (John Le Mesurier) and hypocritical landlady, Mrs Crevatte (Irene Handl). However, there's elegant support from the always-reliable Sanders and Hancock's hideous sculpture, 'Aphrodite At The Water Hole', is a glory to behold. Brilliantly, it was recreated in 2002, along with the various childlike paintings featured in The Rebel, for an exhibition put on by the London Institute of Pataphysics and purporting to showcase the work of a real artist, sadly unappreciated in his own time, by the name of Anthony Hancock. 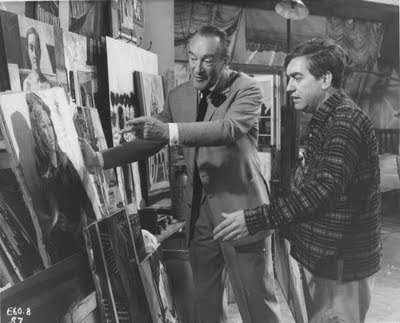 The Rebel was released in America as Call Me Genius but was deemed too Anglocentric and failed to make the transatlantic splash its star had been hoping for. Acclaimed painter Lucian Freud, however, apparently once told Galton and Simpson that he thought The Rebel was the greatest film about modern art ever made, which is surely worth something. For those of a morbid bent, the film is what Kenneth Anger would have termed a "double suicide picture" - both Hancock and Sanders would later tragically take their own lives.
Posted by Joe at 10:04