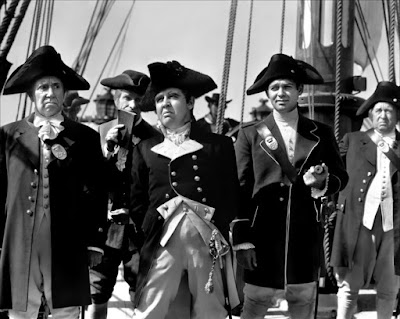 "Whenever an officer fails to win the affections of those who are under his command, he may be assured that the fault is chiefly in himself."
- Robert Southey, The Life Of Nelson (1813)

A jewel in the crown of Louis B. Mayer's MGM from the Thalberg years, this lavish, Best Picture-plundering naval drama starred Clark Gable as Master's Mate Fletcher Christian and Charles Laughton as the tyrannical Captain Bligh aboard the HMS Bounty, a real ship that set sail for the South Sea island of Tahiti in 1787 in search of breadfruit trees to transfer to the British slave colonies of the West Indies. Based on a historical trilogy co-written by two US Army Air Service pilots, Charles Nordhoff and James Norman Hall, Frank Lloyd's film tells of the appalling conditions endured by the sailors at the hands of Bligh, a remorseless disciplinarian. The crew are lashed, flogged, keelhauled, tied spread-eagled to the rigging, imprisoned in the crow's nest and starved for the slightest "insubordination" until the men are finally forced to rise up against him, with the reluctant Christian seizing command. His idealistic friend, Midshipman and lexicographer Roger Byam (Franchot Tone), is caught in the middle and later returns to England to face a court-martial. Christian meanwhile evades capture by sailing the Bounty off to nearby Pitcairn island, where the remaining mutineers establish a new colony with their Tahitian brides (which actually didn't work out too well in spite of its optimistic presentation here). 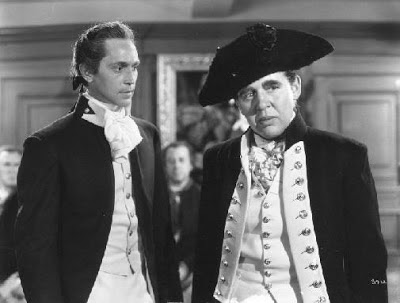 Laughton struts and bellows about the deck in some style and Gable is suprisingly well-suited to the English gentleman-of-conscience role, even if his relationship with Tone does become weirdly homoerotic during the shirtless Tahiti sequences. Bill Bambridge is charming as tribal chief Hitihiti and Dudley Digges does well as the aptly named ship's surgeon Dr Bacchus, a rum-sodden, peg-legged old sea dog ("You're a plucky youngster, I'd be glad to cut off your leg anytime"). Overall Lloyd's film nicely conveys the class conflict aboard ship - aristocratic adventurism paid for with the blood, sweat and toil of able seamen - and ends up being a fable about competing management styles and a plea for humane working conditions. Mutiny is a touch flabby and overlong in places but the central tropical paradise scenes do provide some welcome refreshment. 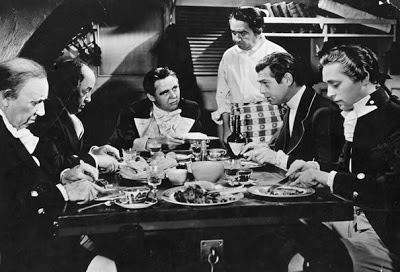 Apparently Lloyd planned to make a sequel with Laughton about Captain Bligh's later career as governor of an Australian penal colony but it never came to pass. Cary Grant and Wallace Beery were the original choices for Byam and Bligh but Grant was under contract to Paramount and unavailable while Beery hated Gable and refused to commit to a long location shoot with him. In the end, producer Thalberg picked out Gable and Laughton to appear together as he believed they would sincerely despise one another, Laughton being a bisexual and Gable a homophobe. Sure enough, they did. A cameraman, Glenn Strong, was killed when a boat ferrying 55 crew capsized during filming in the South Pacific. James Cagney and David Niven are said to have uncredited cameos here as extras but I must admit I didn't spot them. 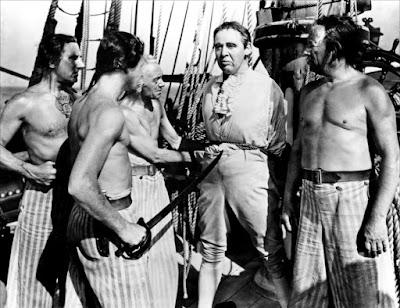 Other cinematic versions of this weather-worn yarn include two Australian versions: a silent from 1916 and In The Wake Of The Bounty, starring Errol Flynn as Fletcher Christian in 1933. A widescreen, Technicolor remake of Lloyd's film by Lewis Milestone appeared in 1962 with Marlon Brando and Trevor Howard, which was in turn followed by The Bounty, a 1984 adaptation from a different account by Richard Hough with Mel Gibson and Anthony Hopkins, directed by Roger Donaldson. Joseph Cotten and Orson Welles also took on these meatiest of roles in a radio broadcast for The Campbell Playhouse in January 1939. This latter is especially good but interrupted periodically by imploring announcer Ernest Chappell making the most tenuous connection imaginable between the story and the sponsor's brand of tinned chicken soup.
Posted by Joe at 09:48