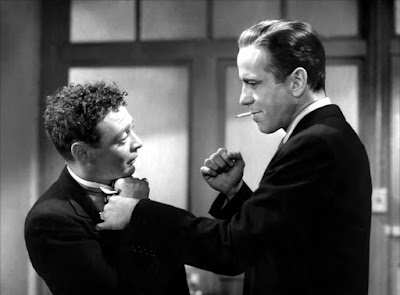 "The stuff that dreams are made of."

John Huston's directorial debut, an early milestone in film noir and the rebirth of Bogie as a romantic hero after years spent dwindling away his talent on the Warner lot in so-so gangster movies with James Cagney and George Raft as punishment for kicking against his contract.

This was the third adaptation of Dashiell Hammett's hard-boiled 1930 detective novel in the decade since its serialisation in Black Mask magazine. Roy Del Ruth first tried it in 1931, followed by William Dieterle in 1936, whose light-hearted Satan Met A Lady featured Bette Davis. While their efforts were by all counts pretty forgettable, Huston's stands for all time. Pacy, claustrophobic, snappy and biting, rarely has a better ensemble cast been gathered together in one place, with Mary Astor, Peter Lorre, Elisha Cook Jr, Ward Bond, Barton MacLane, Gladys George, Lee Patrick, Jerome Cowan and Sydney Greenstreet (making his screen debut aged 60 and weighing in at 357 pounds), all note-perfect. The pin-striped Bogart in particular, in a role that Raft turned down because he doubted the film would be sufficiently "important", is smart, cynical and just a tad sadistic, grinning through those sharp little teeth as he slaps Lorre around. Greenstreet too is an absolute treat ("By gad sir, you are a character!"). Third time lucky for Hammett, Huston's Maltese Falcon is a true masterpiece. 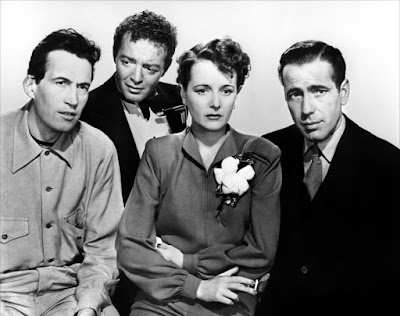 The plot is ostensibly about San Francisco private eye Sam Spade's (Bogart) involvement with a gang of back-stabbing treasure hunters desperate to get their mits on the priceless statuette of the title. Naturally there's a great deal more to it than that and Huston's film is played out as a lengthy war of words, the protagonists competing with one another through a barrage of rhetoric, manipulation, outright lies, counter-lies, half-truths, accusations, haggling and gunpoint diplomacy, all taking place on a battlefield of cramped little rooms, from Spade's office to Brigid O'Shaughnessy's (Astor) apartment and Kasper Gutman's (Greenstreet) hotel suite. 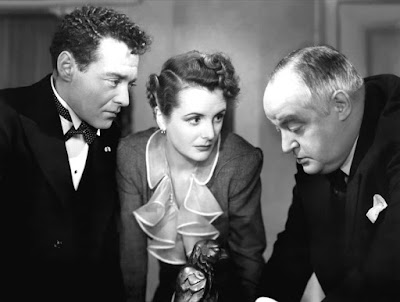 What this is really about though is Spade's inability to act on his certainty of O'Shaughnessy's guilt over the murder of his partner, Miles Archer (Cowan). As Robert Edenbaum put it, The Maltese Falcon is, "a combat between a villain(ess) who is a woman of sentiment, and who thrives on the sentiment of others, and a hero who has none, and who survives because he has none." Described in Hammett's source novel as "a blond Satan", Bogart's sneering, insolent Sam Spade is in love with Brigid and only at the end wins the battle with his conscience and hangs on to his integrity by deciding to do the right thing and hand her over to the police (Bond and MacLane): "I won't play the sap for you." Spade sacrifices the possibility of happiness for a sure thing because, with Brigid in jail, he can at least be certain this ultimate femme fatale won't one day turn around and plug him in the guts. For Hammett, the universe was a place with no rhyme or reason to it. Spade's work brings meaning to his existence and has taught him to back a dead cert when he sees one, no matter how painful the consequences.

The black enamelled "dingus" itself - a real historical relic gifted by the Knights Templar to King Charles V of Spain for giving them the island of Malta in 1539, which was lost after pirates raided the galley transporting it - finally turns out to be a leaden fake and, in cinematic terms, a macguffin. This further enforces Hammett's theme of the chaotic, meaningless nature of the cosmos. Gutman's 17 year search for this Holy Grail may have been in vain but it was also all he had to live for, so the revelation that his falcon isn't the real one actually comes as a godsend. The ongoing quest can continue to give shape and purpose to the fat man's life and the look of sheer relief on Greenstreet's face as the realisation dawns on him says it all. Nothing could be worse than getting what he wanted. Incidentally, the black bird that appears in the film was made by artist Fred Sexton, a friend of Huston's who was questioned by the L.A.P.D. in 1949 regarding another acquaintance, Dr George Hodel, one of the suspects in the ongoing Black Dahlia murder investigation. 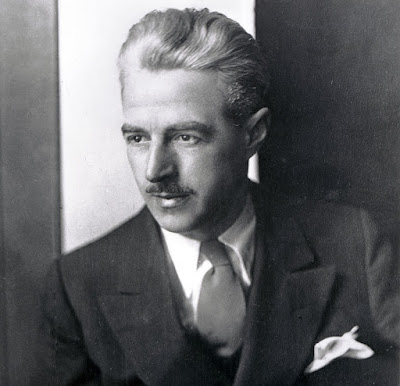 Samuel Dashiell Hammett (1894-1961) had been a professional private investigator himself with the Allan Pinkerton agency. Signing up in 1915, he was soon drafted to serve in World War One before returning to the beat and working on the infamous Fatty Arbuckle rape case. Other less auspicious assignments included being employed to dismiss a lady's housekeeper, tracking down "a man who once stole a Ferris-wheel" and being asked to assassinate Frank Little, a trade union agitator from Butte, Montana, a job he declined. His greatest triumph was discovering a stash of stolen gold coins aboard a freighter bound for Australia, an incident that perhaps had some influence on the La Paloma sequence in The Maltese Falcon. Ultimately, however, he grew disillusioned with the mundane realities of the business and turned to writing, bringing a new procedural authenticity to crime fiction based on his experiences. Hammett said of the Maltese Falcon's hero in 1934, "Spade had no original. He is a dream man in the sense that he is what most of the private detectives I worked with would have liked to have been." Brigid O'Shaughnessy though is thought to have been based on a real person, Peggy O'Toole, his secretary from the Pinkerton days. The effeminate, gardenia-scented Joel Cairo (Lorre) was inspired by a forger he picked up in 1920, Wilmer (Cook), the young gunsel, by the "Midget Bandit" of Stockton, California, and Gutman by a suspected German secret agent he once tailed in Washington.

Howard Duff took on the part of Hammett's most famous detective for The Adventures Of Sam Spade on US radio between 1946 and 1950, while Bogie of course went on to Casablanca (1942) and Raymond Chandler's Philip Marlowe in The Big Sleep (1946). However, Bogart did return for two radio dramatisations of The Maltese Falcon for The Screen Guild Theater on CBS, one in 1943 with Astor, Greenstreet and Lorre, another in 1950 with wife Lauren Bacall. Cecil B. DeMille also produced a version in 1943 for the Lux Radio Theater, starring Edward G. Robinson as Spade. 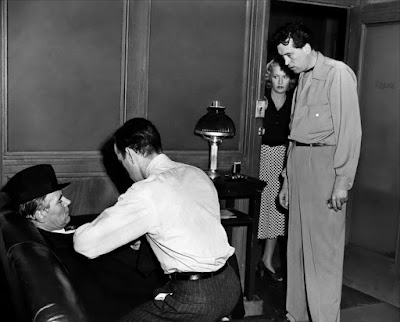 Here's an interesting shot of a hunched John Huston directing his star on set with his own father, the great Walter Huston, in a cameo as the dying Captain Jacobi. Patrick, playing Spade's loyal secretary Effie Perrine, looks on.