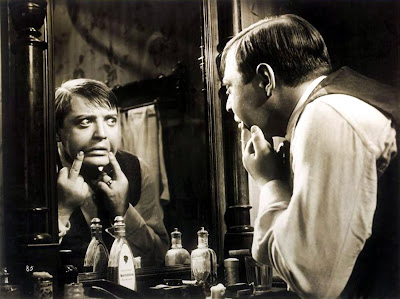 Fritz Lang's first sound film was this chilling portrait of a serial killer co-written with his wife Thea von Harbou and based partly on press clippings about the arrest on 24 May 1930 of Peter Kürten, "the vampire of Düsseldorf". Lang relocates the story of a brutal child murderer to a labyrinthine Weimar Berlin whose tenements and alleys are hung with long, shabby stretches of black and stalked by fear. The kinder out playing in the courtyard sing an ominous nursery rhyme akin to the "One, two, Freddy's coming for you" refrain from A Nightmare On Elm Street (1984) while frightened mothers run to the windows to shush them. Hysteria rules as Lang's camera lurks over, peers under, stares at and chases after. When Elsie Beckmann (Inge Landgut) idly bounces a ball down the street, a shadow is cast across a wanted poster, recalling that of Max Shreck in F.W. Murnau's 1922 Nosferatu (both films shared a cinematographer in Fritz Arno Wagner). And like the little girl tossing flowers into the lake in James Whale's Frankenstein (also 1931), we know from this moment on that her fate is sealed. After all, how could an old blind balloon-seller come to Elsie's aid?

The crimes of Peter Lorre's Hans Beckert are all the more horrific for occurring off-screen. We are left to imagine the extent of his depravity by clues in the dialogue and this makes it personal and thus far, far worse. The young Slovak stage actor making his celluloid debut was not the criminal type audiences had come to expect. Instead of the hairy-handed, lantern-jawed evolutionary retrogression popular with Victorian phrenologists of the Lombroso school, Lorre appears as a pudgy, overgrown baby of a man. His bulging eyes, sweating brow and nervous clawing at his own knuckles suggest someone frantic in the knowledge that he is only in control of himself some of the time. Whether he is harmlessly looking at a shop window display, peeling apples or knocking back cognac in a café, Lorre's Beckert positively crackles with inhuman possibilities. The chalk mark of Cain printed on his shoulder uncomfortably anticipates the labeling of "undesirables" under Nazi rule and his final anguished plea, in front of the kangaroo court of his criminal peers (shot with a cast of real felons in a decommissioned zeppelin hangar), shudders through your bones. This climax also recalls Frankenstein, where another monster is cornered and confronted by angry vigilantes. Lorre's performance throughout, particularly his repeated whistling of 'In The Hall Of The Mountain King' from Edvard Grieg's Peer Gynt (1876), may never quite leave you. 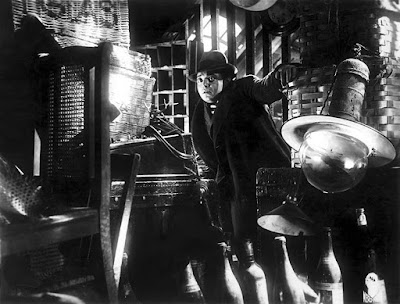 Lang's film is very much about the inadequacies of the rule of law and the fine moral line between the policeman and his prey. With the criminal underworld frustrated by the heightened police presence on Berlin's streets and the frequent raids on their usual haunts, they too join the manhunt for Beckert. Employing the "Beggars Union" (inspired by Bertolt Brecht and Kurt Weill's Threepenny Opera, 1928) as a network of spies and informants across the city, a gang of burglars, thieves and pickpockets led by mastermind Schränker (Gustaf Gründgens) corner Beckert in an office block before subjecting him to a mock trial. Their tactics parallel the official investigation being carried out by the dogged and charismatic Inspector Karl Lohmann (Otto Wernicke, who would reprise his role two years later in Lang's The Testament Of Dr Mabuse). To ensure an authentic portrayal of police procedure, the director spent time at Scotland Yard and Alexanderplatz researching the latest techniques in forensics and finger-printing for M, as well as eight days at a mental asylum to better understand the mind of a murderer. The criminal court argues that Beckert will cynically deploy an insanity plea to escape justice and shirk responsibility, spending the rest of his days living in institutional comfort at the taxpayer's expense before one day inevitably breaking out or being released to kill again. Their conclusion that no man has the right to take a life under any circumstances is surprisingly liberal and tolerant and serves as a profound statement against the death penalty, which was ultimately the fate of Peter Kürten and something Fritz Lang vehemently opposed. For Lang, Beckert is mentally ill, not evil, and thus deserves treatment, not execution.

Thanks to the modern miracle of YouTube, you can watch M in its entirety right here and now without paying a single solitary euro. Do it. This haunting work of art is well worth your time. And, if anything, M is more relevant today than ever in an era when the paedophile has become the all-purpose tabloid bogeyman of choice. The early scene in which a kindly old man is harassed by a suspicious mob for even speaking to a child alone is especially prescient.