Falling chandeliers, doors creaking closed of their own accord, blood dripping from the ceiling, a severed head in a suitcase, loaded revolvers in mini coffins, a writhing pit of acid. But that plastic skeleton's not fooling anyone.

Schlock ringmaster William Castle's original House On Haunted Hill, from a story by Robb White, is suitably atmospheric and has a few genuine surprise moments going for it but is ultimately too naff for its own good. The decision to use the Ennis House in Los Angeles for exterior shots, a brooding pile of textured concrete blocks designed by Frank Lloyd Wright in 1923 to look like a Mayan temple, makes for a very original horror setting (compared with, say, the more conventionally scary "California Gothic" house in Hitchcock's Psycho, 1960) but somehow it never quite matches up with the cobwebbed corridors and dungeon-like cellar inside. The no-name cast of sceptical strangers - assembled by Vincent Price's eccentric playboy to spend a night in the titular dwelling for $10,000 - are pretty anonymous, with the worthy exceptions of Carol Ohmart as femme fatale Annabelle Loren and a nervous, boozy Elisha Cook Jr as the property's owner, convinced of the ghostly goings-on (Cook would take a cameo in Rosemary's Baby nine years later, a more ponderous Castle horror production). Unfortunately though, most of Herman Townsley's special effects just look laughable today and, really, it's only Price's easy urbanity and Von Dexter's creepy, kooky, altogether ooky score that make House On Haunted Hill worthwhile. Undeterred, Price, Castle and White would reunite soon after for The Tingler (1959). 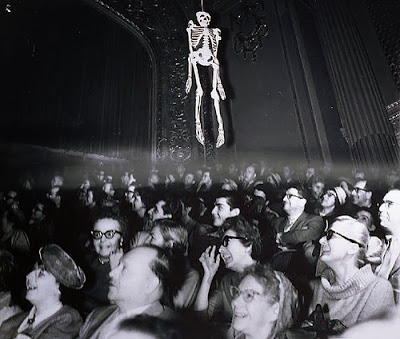 For me, the very idea of the "explained supernatural" always feels like a cop-out. I dare say House On Haunted Hill would be more thrilling if one were to see it on the big screen with the "Emergo" gimmick in place, as Castle originally intended. This was a funfair effect in which a complex pulley system was hung up in theatres showing the film so that a glowing toy skeleton could be flown over the heads of the audience on a wire to brush their shoulders at appropriate moments during the screening. The device was soon dropped, however, when teenage vandals began to hear about it and arrived to see the film in droves with their slingshots poised, ready to shoot it down. Cult director John Waters, a great champion of all things trash, remains a vocal admirer of Castle (below) and wrote an article for the December 1983 edition of American Film entitled 'Whatever Happened To Showmanship?' in which he praised the producer and called on modern exhibitors to embrace his ingenious promotional tactics. 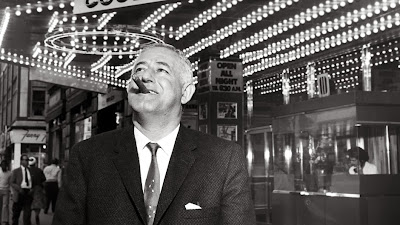 Another interesting point about this rather silly B-movie is that it is a rare example of an American film from the fifties in which a psychiatrist turns out to be the bad guy. As Peter Biskind points out in his book Seeing Is Believing (1983), Hollywood had for years been portraying the shrink as a buffoonish academic figure, usually beardo Sigmund Freud types with mock-Viennese accents. Then came the war and Hitchcock's Spellbound (1945), which dared take the subject seriously on screen and spawned a decade of mainstream studio films with heavy psychological subtexts. When Vincent Price (again) appeared as a murderous psychiatrist in Alfred L. Werker's post-war suspense thriller Shock in 1946, the film was shouted down by critics like Bosley Crowther of The New York Times who feared, "the basic design of the picture is to create a phobia of psychiatry." 13 years later, House On Haunted Hill returned to the duplicitous psychoanalyst in the person of Alan Marshall's Dr David Trent, apparently only present as the rationalist voice of reason, but who later turns out to be having an affair with Price's wife and plotting homicide. A real throwback to attitudes as old as Dr Caligari.
Posted by Joe at 11:31