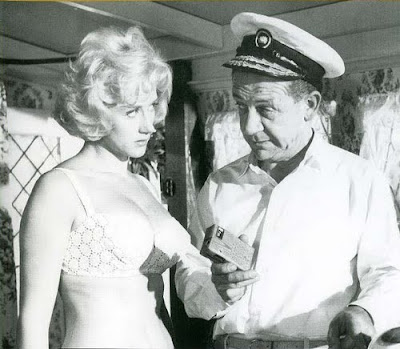 Sexually frustrated lovers Ian Carmichael and Janette Scott are turfed out of their lodgings in Hammersmith, get married and are then duped into buying an old heap of a houseboat called the "Jasmine Gay" (echoing the "Swiftmobile" from Carmichael and Scott's previous collaboration, School For Scoundrels, 1960). Under the influence of his dodgy mate Sid James (who else?), engineer Carmichael fixes it up and sets off down the Thames in a bid to give his wife a belated honeymoon cruise to Ramsgate. Inevitably, they're joined by Sid and his stripper girlfriend (Liz Fraser) and, perhaps even more inevitably, calamity ensues as the foursome end up breaking their compass and getting lost, a ship of fools drifting across the Channel towards Calais. 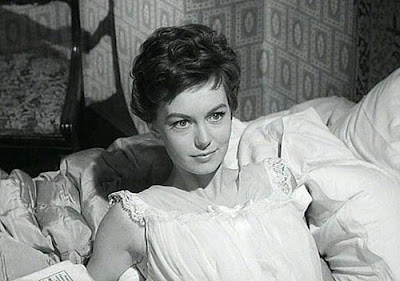 A bit of a mess in truth, Double Bunk, directed by Scrooge (1951) cinematographer C.M. Pennington-Richards, suffers from an awkward uncertainty of tone and squanders a wealth of decent comic performers in minor roles. The very game Fraser relaxing on deck in her bikini provokes a certain amount of leering, falling in the water and pre-Carry On bawdiness but it's quite a lot less risqué than, say, a Donald McGill postcard and you're ultimately left feeling the film-makers lacked the courage of their convictions. Meanwhile, the great Miles Malleson, playing an Anglican angler, turns up simply to get splashed, Irene Handl does her usual brief turn as a disgruntled domestic, Noel Purcell is again a drunken sailor and Reginald Beckwith, Naunton Wayne and Terry Scott are all criminally underused. June Whitfield is heard and not even seen as one half of an amorous couple unceremoniously interrupted in their lovemaking under tarpaulin, not once but twice. Only Dennis Price as Watson, the villainous boatyard owner, gets a proper innings but even he looks worn down and uninspired. Scott is plucky enough in the thankless, angry straight-woman role and Carmichael and James just do their familiar bits. The French have L'Atalante (1934) and La Bête Humaine (1938), we have Double Bunk and The Titfield Thunderbolt (1953).

I think what's most surprising about the film, a rather forgettable and indeed largely forgotten little caper that plays on misty-eyed nostalgia for the British boating craze of the late Victorian era, is that someone bothered to write a theme song for it. But so they did and it's actually quite jaunty. Written by Stanley Black, Mike Pratt and the appropriately named Jack Fishman, it's sung by James and Fraser and captures the cheery, lightly smutty mood of the film. Not a classic by any stretch of the imagination but a pleasant enough period curiosity, rather like Double Bunk itself.