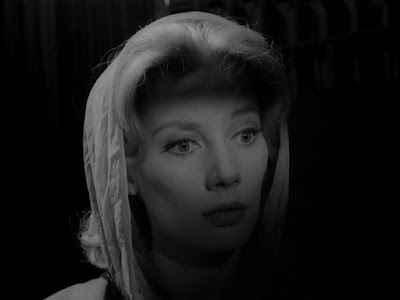 An incredibly eerie, atmospheric little number from Herk Harvey and co-writer John Clifford in which a young church organist, the only survivor of a tragic drag race accident, finds herself unable to connect with other people, haunted by the spectre of a decomposing man and strangely compelled to visit an abandoned fairground pavilion near Utah's Great Salt Lake.

Beautifully shot in an otherworldly black-and-white, Harvey's purgatory fantasy recalls the contemporaneous Twilight Zone (1959-64) TV series and was made for around $33,000, taking just three weeks to shoot. The director, whose day job was making public information films for the Kansas-based Centron Corporation, aimed high, hoping to marry the "look of a Bergman" with the "feel of a Cocteau". The resulting film's success owes a great deal to Gene Moore's gloomy organ score (apparently the only thing on the radio in Utah) and to sensual star Candace Hilligoss, who single-handedly carries the picture. This Method actress has something of the Janet Leigh about her and a nice way with a quizzical raised eyebrow. She gets better as the film goes on when her spooked look, emotional distance and sexual frigidity come to be explained (surprisingly, Hilligoss only ever appeared in one other film, The Curse Of The Living Corpse, 1964). The final chase - in which she is pursued by the spirits of the amusement park and forced to waltz away with them into eternity - is daring and arty but the big reveal that follows won't surprise fans of M. Night Shyamalan, who made his name ripping it off. Hilligoss aside, some of the supporting players are so wooden you could make furniture out of them although Sidney Berger is memorable as a lechy neighbour. Harvey himself played the ghoul who dogs the heroine's every move.


Other classic horrors now in the public domain and available in full on YouTube, thanks to the benevolent Mr Lucky Strike 502, include Robert Wiene's legendary The Cabinet Of Dr Caligari (1920), Dr Jekyll & Mr Hyde (1920) starring John Barrymore, F.W. Murnau's Nosferatu (1922), Phantom Of The Opera (1925) with "man of a thousand faces" Lon Chaney and George A. Romero's Night Of The Living Dead (1968), which must surely have been influenced by Carnival Of Souls. Also highly recommended is a very early Frankenstein short made by Edison Studios in 1910. Wonderful thing, the internet.
Posted by Joe at 09:56