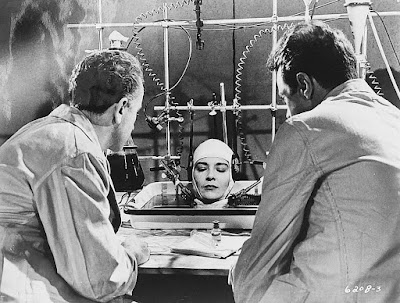 "Like all quantities, horror has its ultimate, and I am that."

Wow. Joseph Green and Rex Carlton's terrific B shlocker, a precursor to Re-Animator (1985), is a riot from start to finish and is actually pretty competently directed. The story concerns Dr Bill Cortner (Jason Evers), a mad scientist and experimental surgeon whose fiancée Jan (Virginia Leith) is decapitated in a car accident (check out the gloriously inept stunt work). Salvaging her head, the deranged doc hurries to his country retreat to try and revive the brain. Naturally, things don't turn out as planned. Jan's head understandably resents not being left to die and soon teams up with the monstrous mutant he keeps locked up in a closet after an earlier experiment went awry. The pair plot to overthrow the unsuspecting maniac, who is by now out curb crawling in search of model bodies he can use in a transplant operation with Jan. A genre classic, step right up folks.

Leith is tremendously unsettling playing a disembodied head and her performance led to the affectionate nickname "Jan in the Pan" among fans of the picture. Evers too is appropriately sleazy but the prize for hammiest oratory must go to Leslie Daniels as Kurt, Cortner's Igor-like assistant with a mouldy withered hand: "The paths of experimentation twist and turn through mountains of miscalculation and often lose themselves in error and darkness!" Adele Lamont also deserves a mention for her vampish turn as Doris Powell, a facially-scarred and embittered lesbian who resembles Betty Page and works as a glamour model and whose nubile form Cortner plans to reuse in his diabolical scheme. I wonder what the queer theorists make of the idea of grafting a heterosexual's head onto a gay person's body? It strikes me as a very B-movie answer to the social "problem" of homosexuality, as controversial a "cure" as you could ever wish to see. Anyway, there's plenty of camp, quotable dialogue throughout, a jazzy soundtrack by Abe Baker and Tony Restaino and it's all shot in a mundane black-and-white that, as Peter Biskind points out, was often used by sci-fi of the period as an, "ironic counterpoint to their alarming premises". What's not to love?

Interestingly, The Brain That Wouldn't Die ends just where the climax of most horrors of this ilk would begin. The hideous freak bursts free from captivity, kills Cortner and leaves the laboratory to burn with the unconscious Doris in his arms. Usually this sort of thing would happen about three-quarters of the way through and would be followed by a call from Washington to send in the army. Instead, Green and Carlton's ending suggests that the real monster is not the beast heroically rescuing the girl from the flames but the egomaniacal Dr Cortner, lying prostrate on the floor. Even more interestingly, the mutant was played by the 7 foot 6 Eddie Carmel, best known as the subject of, 'The Jewish Giant at Home with His Parents in the Bronx, NY 1970' by Diane Arbus (pictured below). 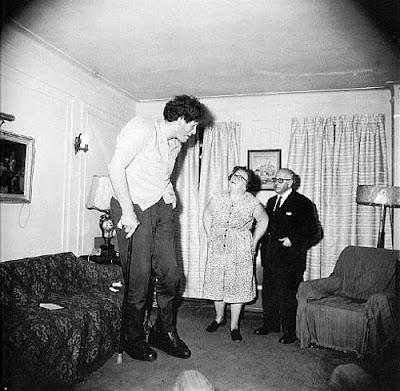