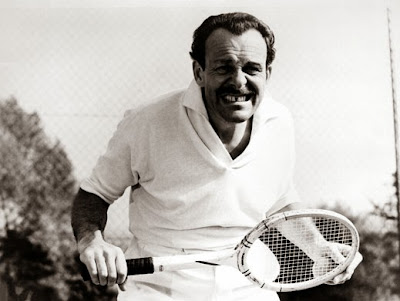 Ian Carmichael stars as Henry Palfrey, a nice guy sick of finishing last after being routinely patronised at work, duped into buying a clanking heap of an ex-colonial jalopy by two "Winsome Welshmen" and in danger of losing out on April (Janette Scott), the girl of his dreams, to fellow clubman and rotten bounder Raymond Delauney (Thomas). In a bid to reverse his fortunes, Palfrey enrolls at the Mephistophelean Dr Stephen Potter's (Alastair Sim) "School of Lifemanship" at Yeovil to learn how always to win the upper hand in any given situation without actually cheating...

This splendid British one-upmanship comedy was credited to Robert Hamer of Kind Hearts & Coronets (1949) fame, although his last film as director was actually largely completed by the unacknowledged Cyril Frankel after Hamer sadly succumbed to the demon drink during shooting. Similarly, the screenplay, based on a series of spoof self-help books by the real Stephen Potter, is credited to brash American producer Hal E. Chester and Patricia Moyes but was in fact largely written by actor Peter Ustinov before being revised by the blacklisted US scriptwriter and exile Frank Tarloff at Chester's request (the producer an "infuriating" man to work with, according to Carmichael, though he did mortgage his Hampstead house just to ensure the film had sufficient funding). All participants though deserve the honours for School For Scoundrels, a very pleasing film indeed with an amazingly rich supporting cast that includes Dennis Price, Peter Jones, John Le Mesurier, Hugh Paddick, Irene Handl and Hattie Jacques in small cameos, many of whom had appeared together with Carmichael and Thomas in the Boulting Brothers' Private's Progress (1956), Brothers In Law (1957), Lucky Jim (1957) and I'm All Right Jack (1959) and all of whom hit their marks perfectly. 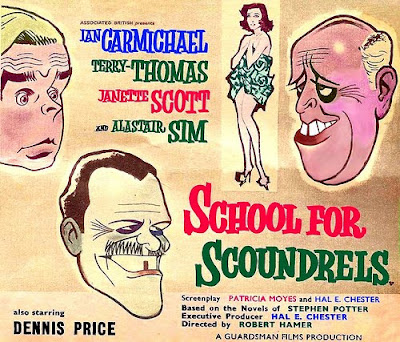 The late Carmichael makes a fine put-upon lead but certainly looks uncomfortable when required to exercise his newfound "woo-manship" skills on Scott, which is odd as they had already been successfully paired in Happy Is The Bride (1958) and would be again soon after in Double Bunk (1961). Nevertheless, we cheer Carmichael on in his triumphs over the "Swiftmobile" and in the rematch against Thomas. Naturally though, it's the latter who really steals the show - purring after Scott and losing his rag with Carmichael in fine style. As biographer Robert Ross said of T-T, "The curl of the lip, the quivering moustache and the gap-tooted sneer were the stuff of British post-war humour. The immediate post-war era itself was somehow encapsulated in the waistcoat-wearing, sports car-driving chancers whom Terry-Thomas perfected". But let's not forget the glorious Alastair Sim too, who had appeared with Carmichael before in the toothless political satire Left, Right & Centre (1959) and who finds himself fronting an unconventional school once again after his masterful drag turn as headmistress Millicent Fritton in The Belles Of St. Trinian's (1954) and Blue Murder At St. Trinian's (1957). His turning directly to camera to decry Carmichael's "sincerity" and bemoan the swirling orchestral score that accompanies the hero getting the girl is as hilarious an ending as it is surprising. Sim may not be the first to break the fourth wall to engage an audience but rarely has the effect been better done.
Posted by Joe at 11:01