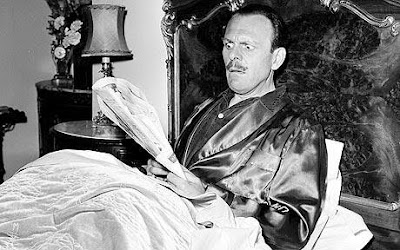 Not a porno - I'm afraid - but rather another Terry-Thomas vehicle of excellent vintage. This time our man stars as Lord Henry Mayley, one of several celebrity victims being targeted by smooth tabloid blackmailer Nigel Dennis (Dennis Price). The villain is planning to launch a new scandal sheet entitled The Naked Truth that will feature outrageous stories about an anonymous person on one page with a flattering and apparently unrelated biography of the guilty party on the opposite, thereby heavily implying that the outrage concerns the named grandee without actually saying so and thus neatly circumventing libel laws. A clever ruse by Dennis, the Star editor who hides out in a rickety barge on the Thames, but he hasn't counted on his prey, including Mayley, novelist Flora Ransom (Peggy Mount), model Melissa Right (Shirley Eaton) and camp "Scottish" TV personality Sonny MacGregor (Peter Sellers), joining forces to thwart him...

Released in America as Your Past Is Showing, this is a decent caper somewhat let-down by the irritating Goon Show mugging and lame accents of a hyperactive Sellers in his familiar "master of disguise" mode. Everyone else involved successfully settles on one comic persona but Sellers tries out a whole boxful without coming close to raising a laugh, inadvertently outing himself as a performer too clever for his own good in the process (I'm afraid I simply have no patience with the man). The original trailer tried to use this as a selling point but the naked truth is that Sellers* is consistently out-classed in every scene he appears in with Thomas, Price or Mount. Director Mario Zampi and scriptwriter Michael Pertwee, who had previously combined for 1951's very uneven inheritance comedy Laughter In Paradise plus three others and would make the woeful Too Many Crooks together with Thomas two years later, soon let things get out of hand with some farcical business involving a body in a trunk, a jail break and a blimp escape over the Atlantic. However, Dennis's plot is a cunning one (Sid James once tried something similar on Hancock's Half Hour with a rag of his own called Blabber Mouth) and there's plenty to enjoy, not least some excellent comic turns from Joan Sims, Miles Malleson and particularly Georgina Cookson as Thomas's wry wife.

Here's another nice bit from Kenneth Griffith (a character actor who went on to a career making political documentaries about the IRA and Northern Ireland), playing Sellers' exasperated valet and actually offering a rather pertinent critique of his co-star.


*To his credit, Sellers was nothing if not self-aware and spoke interestingly about his preoccupation with mimicry and impersonation in 1980: “As far as I’m aware, I’m nothing. I have no personality of my own whatsoever. I have no character to offer the public. I have nothing to project... When I look at myself I see a person who strangely lacks what I consider the ingredients for a personality. I can see personality in other people but I can’t see any in myself. One feels that perhaps through playing so many characters one becomes a sort of nil on one’s own account.”
Posted by Joe at 12:53