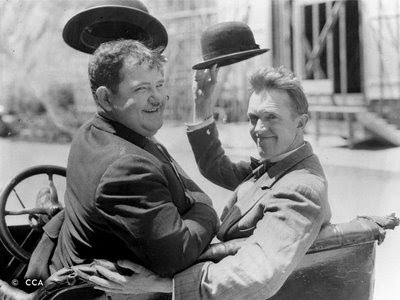 It's amazing how often you can watch the same two people doing the same thing over and over again. No matter how many times you see Fred and Ginger overcome their various misunderstandings, complications and entanglements to fall in love and throw themselves around a big white set, they never lose the zing. Similarly, no matter what ludicrous scrapes Laurel and Hardy find themselves in they always make it worth your while. Their partnership too is a kind of co-dependent love affair - the perpetually exasperated Ollie daring to hope that this time things will be different and the frowning, childlike Stan rely on each other to get by in a hard world - as well as a tribute to the joys of ineptitude and unshakeable optimism against all evidence to the contrary.

Along with the likes of the French Foreign Legion-set Beau Hunks (1931) and The Music Box (1932), in which the hapless buffoons find themselves charged with shifting a piano up a steep L.A. stoop, Busy Bodies is one of their best-ever Hal Roach sound shorts. Benefitting from the simplicity of its set-up - the boys doing a day's work at a sawmill - there's plenty of expert pratfalls and a death-defying ending that anticipates Chaplin's Modern Times (1936) and still makes audiences gasp. Two chumps falling over, breaking things and slapping each other with saws will always be funny, the paint brush bristle shaving scene is masterful and you've got to love the fact that their car stereo is a fully-functioning gramophone hooked up to the dashboard.
Posted by Joe at 14:14