Vincente Minnelli's The Bad & the Beautiful for MGM is a sharp little Hollywood melodrama about the ascent of ambitious producer Jonathan Shields (Kirk Douglas) from B-movie chancer to Selznick-shaped big shot. 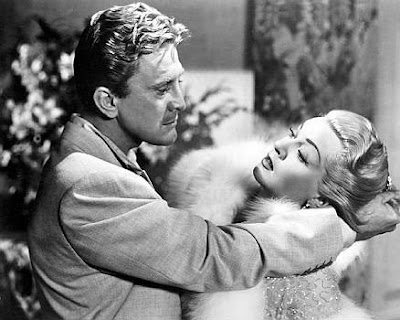 As revealing as Robert Altman's The Player (1992) about the seamy underbelly of studio life - the casting couches, the press agents, the money grubbing - The Bad & the Beautiful is a fairly predictable rise-and-fall job enlivened by some masterful supporting turns. Lana Turner is inspired as the lush bit-part actress hung up on her late father who becomes a star and excels in the frightening suicide drive sequence where she skids along the highway, heartbroken, as the rain thrashes down all around her in idiot sympathy with her tears. Dick Powell is also very droll as a Faulkneresque author reeled in to write the screenplay for an adaptation of his new best-seller and doomed to lose his Southern Belle wife (a charming Gloria Grahame) in tragic circumstances. Powell, a former crooner who made a swell Philip Marlowe in Murder, My Sweet (1944), repeats his smart-aleck schtick here. Also good value are Barry Sullivan as Fred Ameil, Shields' jilted director, Walter Pidgeon as cheapskate mogul Harry Pebble, Elaine Stewart as a bitchy starlet and Sammy White as Turner's sentimental agent Gus. Ultimately though the picture belongs to Douglas, who is on barnstorming form as the man everyone comes to hate. There's a fun scene in the costume department where he and Sullivan have to work out how best to handle a wretched looking, zero budget feline horror quickie - a nice spoof of Jacques Tourneur's Cat People (1942).

The Bad & the Beautiful picked up six Academy Awards in the same year as Singin' in the Rain but only Turner triumphed among the cast. Perhaps things were all a little too close to home for the big beasts behind the scenes. Minnelli directed a sort-of sequel, Two Weeks in Another Town, to less acclaim in 1962.
Posted by Joe at 22:05