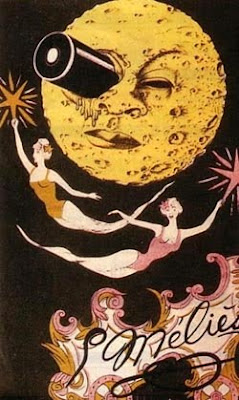 Last night Paul Merton's Weird & Wonderful World Of Early Cinema was on BBC4 and provided a brilliant introduction to the silent era in Britain and France, from the Lumière Brothers' first demonstration of the moving image in Paris in 1895 to the rise of Hollywood after the Great War. Especially illuminating was the tragic story of early superstar Max Linder, who would shoot complete comedy shorts in a single day based on real incidents that happened to him (a kind of better-looking Larry David of the belle époque), and that of stage magician turned sci-fi auteur Georges Méliès.

Méliès was born in 1861, the son of a luxury shoe maker who shunned the family business to work as a conjurer at the Theatre Robert-Houdin in the French capital. After seeing the Lumières' camera in action, Méliès rushed out to establish his own studio and began making films that featured clever illusions and tricks created by experimenting with double exposure, cutting and rewinding. Using elaborate painted sets akin to those of the city's music halls, Méliès was a true pioneer who played a key role in the evolution of cinematic technique and the medium's storytelling grammar. He also had an acute sensitivity for the sort of blockbuster spectacle audiences would be attracted to. Specialising in horror and science fiction and inspired by late Victorian visionaries Jules Verne and H.G. Wells, his most famous film remains A Trip To The Moon (below), which starred acrobats and dancers from the Folies Bergère and the Châtelet ballet. As fantastic as this is, perhaps even more extraordinary is the later Tunneling The English Channel (1907), which predicted the advent of the Eurostar and the Channel Tunnel.

Sadly, after more than 500 films, Méliès' career collapsed with the onset of World War I. He went bankrupt and was forced to sell his back catalogue to Pathé in 1913. An early setback had come when Méliès planned to release A Trip To The Moon in America, only to find that Thomas Edison's representative Al Adabie had secretly copied a print of the film after bribing staff at a London cinema and had already released it in the US without permission - an early and particularly devastating case of film piracy on behalf of the revered inventor. Later reduced to running a toy stall at Montparnasse train station in Paris, Méliès became so embittered that he dug a hole in his garden, filled it with what remained of his priceless reels and memorabilia and torched the lot. However, he did live long enough to see his films reassessed and acclaimed and to receive the Légion d'Honneur before finally passing away in 1938.

Amazingly, a colour print of A Trip To The Moon was unearthed in a French barn in 2002 in which each frame had been meticulously handpainted by a large female work force a century earlier. The world greeted its restoration and re-release with the same excitement and anticipation of its premiere at a Paris fairground and the film continues to inspire affectionate parodies and homages in everything from Futurama (1999-) to The Mighty Boosh (2004-).