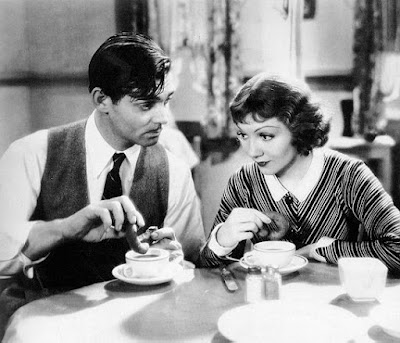 Two of the best-looking people in history bicker, squabble and fall in love on the road in Depression-era America. Frank Capra's It Happened One Night is very much the sort of work Will Hays was talking about when he paid tribute to the Hollywood Golden Age of the thirties by declaring:

"No medium has contributed more than the films to the maintenance of the national morale during a period featured by revolutions, riot and political turmoil in other countries... Historians of the future will not ignore the interesting and significant fact that the movies literally laughed the big bad wolf of depression out of the public."

It's all here: great chemistry, great support ("The name's Shapeley and that's the way I like 'em!") and plenty of laughs from a script by Capra and Robert Riskin. Perfection. Here's Clark Gable's know-it-all newspaperman being well and truly humiliated by high society runaway Claudette Colbert after waxing lyrical about the proper way to hitch-hike in a famous scene that would be parodied a million times, perhaps most memorably by Stan Laurel in Way Out West (1937).

P.S. According to legendary Looney Tunes director Fritz Freleng, Tex Avery and Robert McKimson got the idea for Bugs Bunny after watching Gable munch carrots in It Happened One Night. A case of one cultural icon spawning another. Also, you can hear a great radio dramatisation of the story from the Lux Radio Theater, in which Gable and Colbert plus Walter Connolly and Roscoe Karns reprise their roles for a 1939 Cecil B. DeMille production.
Posted by Joe at 11:50