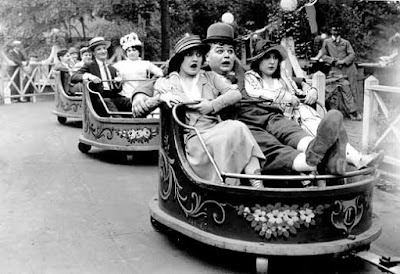 These days, Roscoe "Fatty" Arbuckle is primarily remembered for the Virginia Rappe case that ruined his career. This is a bitter injustice because Arbuckle was a gifted comedian and director with a luminous screen presence and because he was acquitted of any wrong doing. Nevertheless, that sordid affair continues to tarnish his good name. It's perhaps worth recounting once more so that the many glaring holes in the case for the prosecution can again be exposed.

As the story goes, Rappe, an aspiring starlet of 26, died from peritonitis and a ruptured bladder after attending a drunken party hosted by Arbuckle at the St. Francis Hotel in San Francisco on 5 September 1921. Rappe's decidedly suspect friend, Bambina Maude Delmont, told detectives investigating that the comedian had violently raped Virginia, causing her death. Arbuckle protested his innocence and insisted that his only time alone with the girl had been spent trying to revive her after she had passed out drunk. The suspicion that it was all a set up by Paramount head Adolph Zukor, in revenge for the overworked Roscoe's refusal to appear on a studio publicity tour, was glaring even then.

Arbuckle's arrest was immediately pounced upon by the powerful yellow press of the era, orchestrated by media baron William Randolph Hearst, who smeared the fat man with lurid insinuations that he had crushed her beneath his almighty bulk and violated her with a champagne bottle in frustration at his own impotence. The tabloids meanwhile painted Rappe as a virginal innocent, soiled and abused by a Hollywood playboy out of control and accustomed to Bacchanalian orgies and decadent Jazz Age living. She was anything but, of course, having slept around prodigiously and undergone a series of backstreet abortions for the sake of her career (leaving her with damaged reproductive organs) and who was suffering from chronic cystitis, which would only have been aggravated by the excessive amount of bootleg hooch she had consumed on the night in question. Hearst's press machine ensured that Arbuckle was persecuted by its Christian Right readership, who saw the clown as a symbol of Hollywood vice and made his life a misery, even tearing down movie screens in theatres where his films were being shown. The tycoon himself later admitted with a dark chuckle, "Fatty sold me more papers than the sinking of the Lusitania."

After three farcical trials for manslaughter, further complicated by some shaky testimonies from several witnesses for the prosecution (including Rappe's no-good boyfriend, director Henry Lehrman) and the temporary disappearance of a bell jar containing Rappe's internal organs following an autopsy, Arbuckle was eventually acquitted with a glowing endorsement from the foreman of the jury:

"Acquittal is not enough for Roscoe Arbuckle. We feel that a great injustice has been done him... The happening at the hotel was an unfortunate affair for which Arbuckle, so the evidence shows, was in no way responsible. We wish him success, and hope that the American people will take the judgement of 14 men and women who have sat listening for 31 days to evidence, that Roscoe Arbuckle is entirely innocent and free from all blame."

Despite his victory, Arbuckle's films were still banned by the Hays Office and he found himself blacklisted, a sacrificial lamb to the growing "Clean Up Hollywood" movement. Thereafter he was able to direct a handful of pictures under the pseudonym "William Goodrich" before dying of a heart attack in 1933, his final years spent in isolation, a divorced, alcoholic morphine addict still dreaming of a return to the limelight in spite of the ordeal he had suffered at the hands of a hostile press and public.

I realise I'm contributing to the perpetuation of the Rappe story here but the big butterball's case still needs to be heard so that his reputation can be restored. Author Jerry Stahl wrote a sympathetic novel about the sad life of Roscoe Arbuckle in 2005 entitled I, Fatty, which is well worth checking out.

Anyway, here's Roscoe as he deserves to be remembered, capering about at the beach in ladies' clothing with his old pal Buster Keaton, a two-reeler written and directed by the "Prince of Whales" himself. A decent comic outing and a useful historical document of Luna Park in its prime, an "Electric Eden" that opened in 1903 and used to attract 90,000 visitors a day before it burned down in 1944.