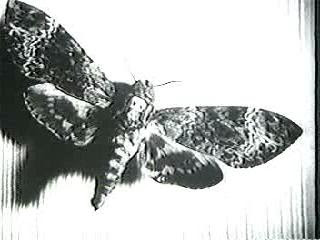 What is Un Chien Andalou about anyway? Is it a serious attempt to capture and visually articulate dream logic? An allegorical mood piece about a man's sexual desire frustrated by systematic authoritarian intervention? A parody of conventional Hollywood narrative? Nothing more than the juxtaposition of a series of arresting, entertaining but ultimately meaningless vignettes? A step-by-step, how-to guide in engineering controversy for budding surrealists? Or is it, in fact, a long misunderstood public information film about the the importance of paying attention when shaving and always washing your hands after picnics?

Naturally, I don't have the answer. A veritable horde of bearded academics, intellectuals, philosophers, art historians, film buffs and fishmongers have spent a good portion of the last century agonising over the meaning of this bizarre little reel and still no one seems any the wiser. The teasing clues - stigmata, pubic hair - ultimately lead nowhere. In the end, it hardly matters. What is certain though is that this 16 minute short, based on the dreams of two Spanish chancers named Luis Buñuel and Salvador Dalí, remains entirely unforgettable and an explosive bid to redefine the very idea of committing images to celluloid. You simply can't get the eyeball slicing scene or the ant-covered hand out of your head once you've seen them and some film-makers, like David Lynch, have never wanted to. Buñuel was perhaps attempting to throw some light on the matter when he wrote a short "Statement" for Film Culture magazine in 1960:

"The screen is a dangerous and wonderful instrument, if a free spirit uses it. It is the superior way of expressing the world of dreams, emotions and instinct. The cinema seems to have been invented for the expression of the subconscious, so profoundly is it rooted in poetry. Nevertheless, it almost never pursues these ends."

Buñuel and Dalí were to reunite in 1930 for a further feature-length sound film, L'Age D'Or, before the former went on to true cinematic greatness with unnerving, symbolic works like Viridiana (1961), The Exterminating Angel (1962) and The Diary Of A Chambermaid (1964). Dalí's only other major contribution to the silver screen was another famous dream sequence, this time experienced by Gregory Peck in the middle of Alfred Hitchcock's Freudian thriller Spellbound (1940). Otherwise the man apparently dwindled away the rest of his career in quiet obscurity, sadly preoccupied with melting clocks, lobster telephones and other such nonsense. I can't imagine any of it ever caught on...

It's Buñuel, incidentally, holding the razor while Dalí appears as one of the confused priests being dragged along. Buñuel apparently filled his pockets with stones before the Paris premiere of Un Chien Andalou in order to pelt any members of the audience who had the temerity to boo. Anyway, without further ado, pray dim the lights and draw the curtains for Un Chien Andalou, the first film to be broadcast in its entirety on Faded Video, courtesy of those bed-wetters and oddballs at Google who make such wonders possible.


Weird, eh? Also for your further sensory delight, check out this classic Pixies track in which a screeching Frank Black references the film and declares himself to be an Andalusian dog. OK Frank, whatever you say...