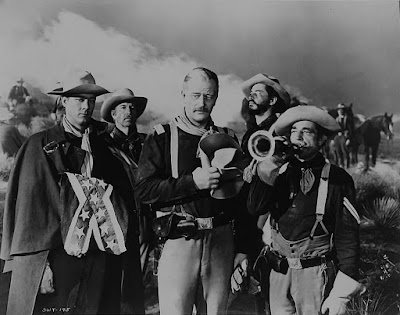 "Never apologise. It's a sign of weakness."
- Nathan Brittles

Following General Custer's Last Stand at the Battle of the Little Bighorn in 1876, US army captain Nathan Brittles (John Wayne) is ordered to escort two women away from Fort Starke, Arizona, and out of the territory for their own protection as Cheyenne and Arapho braves close in. This is supposed to be Brittles' final patrol before his retirement but the career military man is more than a little reluctant to exchange his uniform for civies and a pensioner's silver watch. 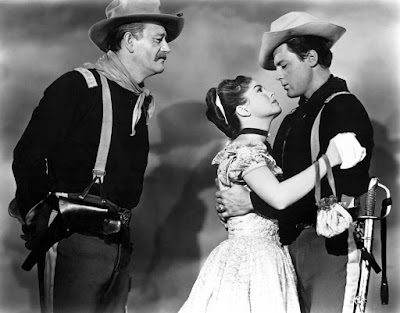 The second of John Ford's cavalry trilogy, bookended by Fort Apache (1948) and Rio Grande (1950), She Wore A Yellow Ribbon finds Big Duke Wayne on splendid form, playing a full generation older than he really was. The drawling action man is often very funny, as when he embarrasses an upstart young lieutenant into going on a picnic by himself. Wayne's friendship with the even more grizzled and perpetually sauced professional Irishman Victor McLaglen is also touching. McLaglen obviously had huge fun with the raucous fight scene that erupts when he refuses to come along quietly, resisting arrest between drinks.

As always with Ford, there's a wealth of beautifully observed long shots of Monument Valley, courtesy of Oscar-winning colour cinematographer and former lab technician Winton Hoch (whose fine work is perhaps not best served by my choice of black-and-white stills). Despite feuding bitterly with his director during the shoot on location at a Navajo reservation, Hoch does wonders with the towering buttes and canyons of northern Arizona, sometimes achieving an almost impressionistic flourish akin to the smoky, romantic landscapes of J.M.W. Turner (the daring midnight raid that brings the film to its conclusion is one example). However, Ford and Hoch's inspiration was an artist much closer to home, the Western painter and sculptor Frederic Remington. 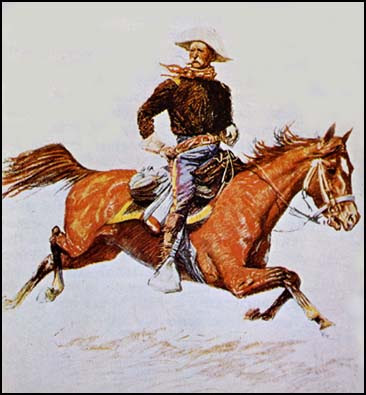 She Wore A Yellow Ribbon is very much in the spirit of Remington's work, national myth-making on an epic canvas. Ford's film stands today as an uncomplicated historical tribute to the boys in blue and gold who tamed a savage wilderness to make it safe for settlers and democracy as we know it. But while Captain Brittles and Sergeant Tyree (Ben Johnson) may be respectful towards the Native Americans throughout, the Injuns remain very definitely the enemy. The US government's right to take up residence on their land is never questioned by Ford or screenwriter Frank S. Nugent, a New York Times critic turned scribe also responsible for The Searchers (1956), a Ford-Wayne collaboration far more critical of white attitudes towards America's indigenous people. Politics aside, She Wore A Yellow Ribbon is a much better film than I remembered it to be, humorous, striking and with an unmistakable undertone of elegaic melancholy for the passing of a vibrant age of heroic masculinity. Lest we forget.

Richard Hageman - She Wore A Yellow Ribbon.mp3
Posted by Joe at 17:29