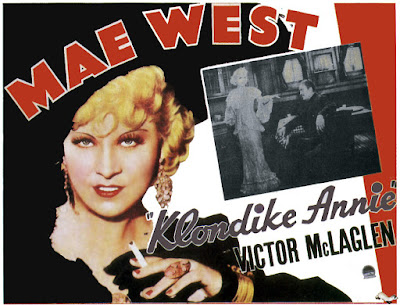 A curiosity but, ultimately, a wasted opportunity. Klondike Annie is a toothless, innuendo-free Mae West vehicle in which our heroine assumes the identity of a late Salvation Army sister aboard a ship to Alaska and finds herself preaching atonement to the hookers, sailors and gold rush prospectors of the frozen north. Yes folks, you read that right: Mae gets religion.

This one must have sounded clever when it was first pitched but the end result is a Sister Act (1992) for the thirties - unfunny, nonsensical and utterly compromised by the homespun Midwestern morals then being enforced on the motion pictury industry by "good taste" czar Will Hays. Surely not even the jug-eared former Postmaster General can have believed Mae's conversion would mean anything to audiences and what was a bad idea to start with ends up utterly bogus in execution. Two scenes given the red pencil treatment included an early one in which Mae murders her cruel Chinese master Chan Lo (Harold Huber) to escape his clutches and an even more macabre one in which she paints the face of the dead woman on board ship to resemble her before switching identities, a plot point that West biographer Charlotte Chandler noticed alligns the film with Michaelangelo Antonioni's preposterously pretentious existential road movie The Passenger (1975), starring Jack Nicholson.

As for the finished Klondike Annie, well, quite what Raoul Walsh was up to behind the megaphone is anyone's guess, he being the action man responsible for The Thief Of Bagdad (1924), High Sierra (1941) and White Heat (1949). One upside is ugly Irish beefcake Victor McLaglen, who proves good value as a horny ship's captain in love with West. "You ain't no oil painting but you're a fascinatin' monster", she tells him. Mae later admitted to Chandler that the reason McLaglen got the gig was "because I'd been eating too much... He was not only tall, but big and bulky, so he was great for the part of Bull Brackett and he made me look petite." Here's another redeeming feature, a scene that finds Mae's Frisco Doll strumming the blues in fine style.


One extraordinarily unlikely fan of West's was British novelist Graham Greene, who was sent along to review the film upon its release by the Conservative political magazine The Spectator. "One cannot but pay tribute to a personality so outrageously suggestive to the middle-aged. I am completely uncritical of Mae West: I enjoy every one of her films... It is with sorrow, therefore, that I have read unfavourable notices of her latest picture", Greene wrote, before going on to defend the film's satirical sense of fun and praise McLaglen's "dumb dog" performance.
Posted by Joe at 09:13