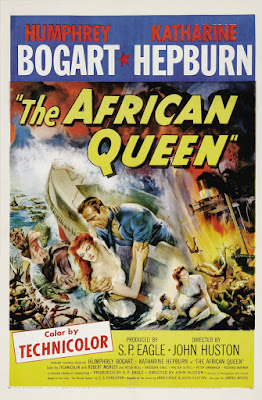 One of Hollywood's great unwritten rules is that any movie featuring a mismatched couple must end with their reconciliation. If it's a buddy cop affair, this should take the form of "grudging mutual respect", often served with a side order of homoerotic banter and longing glances. If it's a romantic comedy, the initially bickering pair will find themselves contractually bound to follow the Pride & Prejudice (1813) blueprint, reassess one another and fall in love.

The latter is very much the case with John Huston's exotic First World War adventure The African Queen, independently-made with the support of legendary producer Sam Spiegel, then calling himself "S.P. Eagle". Based on C.S. Forester's 1935 novel with a script by James Agee, the couple in question are prim Methodist missionary Rose Sayer (a cut-glass Katherine Hepburn) and Canadian "Jack-of-all trades" Charlie Allnut (Humphrey Bogart). Thankfully the chemistry between the two leads is winning and natural, which allows Huston to establish their romance quickly and crack on with the simple, human story of Rosie and Charlie's bid to navigate the tortuous straits of East Africa's Ulanga-Bora river in a rickety old steamer with the intention of doing their bit for the war effort. The lovers plan to sink the Empress Louisa, a German gunboat stationed in a nearby lake, by turning their own vessel into a giant improvised torpedo rigged with gelatin explosives. "Two old people going up and down an African river... who's going to be interested in that? You'll go bankrupt," were the famous last words of Alexander Korda. 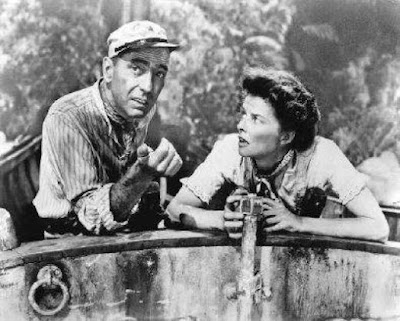 The film's location shoot in the Belgian Congo was famously tough. As Bogie's biographers A.M. Sperber and Eric Lax record, "The local hazards included poisonous snakes, crocodiles, scorpions, invading soldier ants, leprosy, dysentery, and a particularly nasty malady called bilhazia that comes from contact with tainted river water and involves worms working their way under one's skin." Bogie and Huston acclimatised by sitting around the bamboo base camp marinating themselves in Scotch - the star hating every minute of it, the maverick director, nicknamed The Monster, keen for a rain delay to resume his elephant hunting in the jungle. Hepburn adored the landscape, spending time learning the Latin names for the tropical flora and fauna, but fell ill from malaria having resolved to stay teetotal: "Those two undisciplined weaklings had so lined their insides with alcohol that no bug could live in the atmosphere... a very good joke on me." 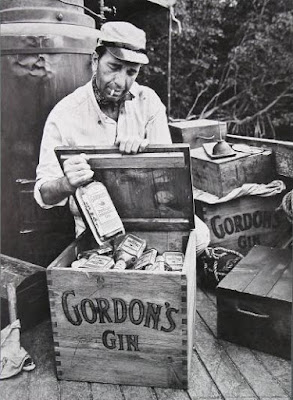 A highly enjoyable, Oscar-winning piece of work then with some vibrant Technicolor cinematography by the late Jack Cardiff, but perhaps not the out-and-out masterpiece it's often claimed to be. Bogie is slightly hammier than usual as Allnut, a little man driven to great deeds by the love of a good woman, but is well within his comfort zone. Allnut is really just one more of Bogart's boozy, cynical expats with a taste for sailing to add to the collection (Huston pitched The African Queen to him thus: "The hero's a lowlife and you're the biggest lowlife in town and therefore most suitable for the part"). Hepburn is also very game throughout - her director instructed her to smile stoically like Eleanor Roosevelt - and the scene in which she sternly pours away Bogie's entire cargo of Gordon's gin, bottle by bottle, was later stolen outright for Pirates Of The Caribbean  The Curse Of The Black Pearl (2003), wherein Elizabeth Swann (Keira Knightley) burns Jack Sparrow's (Johnny Depp) secret stash of desert island rum the morning after, much to his horror and bewilderment.
Posted by Joe at 12:30