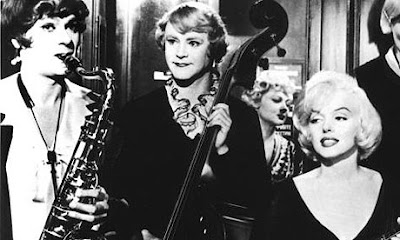 It could all have been so very different. Danny Kaye, Jerry Lewis, Frank Sinatra and Anthony Perkins were all considered for the part of runaway bow fiddler Jerry while Bob Hope was very nearly cast as Joe the jazz saxophinist in a film provisionally titled Not Tonight, Josephine (Hope having already starred in one film called Some Like It Hot 20 years previously). Billy Wilder had vowed never to work with producer's choice Marilyn Monroe ever again after the frustrations of shooting The Seven Year Itch (1955) with a leading lady almost constitutionally incapable of learning her lines. On top of that, Monroe's studio contract stipulated that all her films had to be shot in Glorious Technicolor in order to best showcase her charms - a move the Austrian director was desperate to avoid, fearing it might make his male stars look grotesque when appearing alongside her in drag.

Fortunately for us, Jack Lemmon and Tony Curtis won the casting battle and the rest is history - despite the combined best efforts of the state of Kansas and the National Legion of Deceny, a Catholic censorship mob who wanted to see Some Like It Hot banned. Monroe was indeed a nightmare on set, upsetting her co-stars and crew by forever turning up late and unprepared. It apparently took her 47 takes to say, "It's me, Sugar" and 83 to ask, "Where's the bourbon?" with her back to camera. Ill-feeling was such that she was not even invited to the film's wrap party. However, everyone's perseverance paid off as she turns in her best-ever comic performance as dippy ukulele strummer Sugar Kowalcyzk, sending up her public image with good humour and positively glowing during her three musical numbers. Marilyn may still be ubiquitous today as a nostalgic style icon, her image adorning everything from calenders to posters to bookmarks, but when was the last time you actually sat down and watched her doing her thing?

One angle often overlooked by viewers of Some Like It Hot is its brilliance as a spoof of the Warner Brothers gangster flicks of the thirties. Set in 1929, Wilder's film opens with a police car pursuing a hearse, which turns out to be ferrying tommy gun-toting mobsters and a coffin full of bootleg whiskey, through the backstreets of Al Capone's Chicago to Mozzarella's funeral parlour, a front for a mafia speakeasy. It's here where hard-boiled Detective Mulligan (Pat O'Brien) first encounters crime boss Spats Colombo. The casting of George Raft (a Warner regular most famous for turning down the parts that made Humphrey Bogart a star) as Spats was crucial, as the actor chose wisely to play it straight in a zany picture otherwise concerned with amateur transvestism. There are plenty of cute gags when the "Friends of Italian Opera" congregate in Florida for their annual convention: Spats threatening his henchman with a grapefruit à la James Cagney in The Public Enemy (1931) and sneering at Johnny Paradise for mimicking his own coin-flipping trick from Scarface (1932). Paradise is played by one Edward G. Robinson Jr, who featured alongside his father in Little Caesar (1931) and who almost convinced the old man to play Little Bonaparte here (a role eventually taken by the frothing Nehemiah Persoff). Another veteran of Little Caesar is George E. Stone as Toothpick Charlie. Mike Mazurki also appears as one of Spats's hoods - a wrestler and former bodyguard to Mae West (insert joke here) turned character actor, most famous for playing Moose Malloy in Edward Dmytryck's popular Raymond Chandler adaptation Murder, My Sweet (1944). Blending crime fiction with recent American history (prohibition, the St Valentine's Day massacre), Wilder and I.A.L. Diamond spin a web worthy of James Ellroy or Martin Scorsese.

In a genuinely daring screwball farce filled with nice comic bits, especially Joe E. Brown as "naughty boy" millionaire Osgood "Zowie!" Fielding III, Joan Shawlee as Sweet Sue and Al Breneman as the horny bellhop, Lemmon and Curtis walk away with it. In heels, no less. Lemmon is hilariously deranged as Daphne - beaming blissfully as he shakes his maracas till dawn dreaming of married life with Osgood, a picture of frazzled sexual frustration on the night train as a slumber party erupts in his berth. Curtis's imitation of Cary Grant as Junior, the Shell Oil heir, has long since passed into legend ("I don't talk like that", muttered Grant on seeing the film). So much so, in fact, that it's become a sort of go-to voice for faux-sophistication. See Dana Carvey's variation on the theme in Wayne's World 2 (1993), the morning after Kim Basinger's Honey Horneé makes a man of Garth. 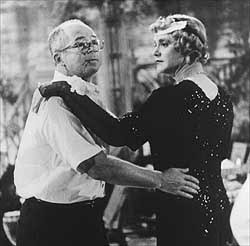 Both Lemmon (above right, with Wilder) and Curtis handle the cross-dressing superbly without resorting to camp and it never once feels like pantomime. The pressure of role-playing adds greatly to the film's pacing - the tension created by Curtis racing Monroe to the pier without realising that he's still wearing Josephine's earrings is worthy of Hitchcock. And that famous closing line was only thought up the night before shooting by Wilder and Diamond and was almost abandoned in favour of a tango scene featuring Sugar and Spats. As fun as that sounds, the end result provides Some Like It Hot's real signature and is one of the truly great moments in American movies.

Marilyn Monroe - I Wanna Be Loved By You.mp3