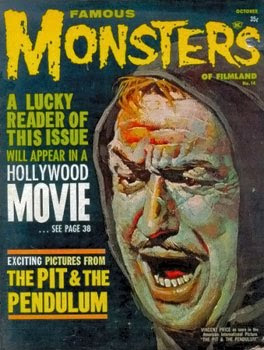 I'm a huge Vincent Price fan and for my money The Pit & The Pendulum is probably the best of his overripe Edgar Allan Poe cycle with cheapo director Roger Corman. Science fiction novelist Richard Matheson fleshed out Poe's original story by rehashing the basic premise of Corman's House Of Usher adaptation a year earlier (by way of Joseph L. Mankiewicz's Dragonwyck, 1946) to tell the tale of 16th century English nobleman Francis Barnard (John Kerr) turning up unannounced at his brother-in-law's Gothic pile on the Spanish coast to investigate the circumstances behind his sister's sudden death. There he finds a grieving Nicholas Medina (Price), tormented by his father's antics as a torturer during the Spanish Inquisition and the sneaking suspicion that he may just have buried his beloved bride prematurely on the advice of his shifty physician (Antony Carbone, veteran of Corman's ridiculous spoof Creature From The Haunted Sea, 1961).

Price is as splendidly flailing as ever as Freudian case study Nicholas Medina, Kerr is so wooden it's endearing (he seems to have studied acting at the little-known Stanislavski School of Intense Squinting) and Barbara Steele as the "revenant" Elizabeth gives the film an added frisson for modern audiences as she rises from the grave looking eerily like the late Michael Jackson (Steele was fresh off Mario Bava's notorious Italian vampire-witch schlocker Black Sunday, 1960, banned in the UK until 1968). The shoestring sets by Daniel Haller are a treat - all giant cobwebs, suits of armour, shaky stone stairwells and dry ice. There's also some good use of psychedelic colour filters by cinematographer Floyd Crosby, especially during the nasty flashback sequence to Nicholas's childhood. The Pit & The Pendulum provides some real scares too - the haunted harpsichord and final shot of the iron maiden closed on Elizabeth forever standing out.