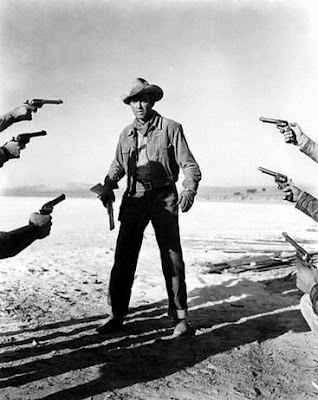 This was Anthony Mann's eighth and final film with Jimmy Stewart (five of which were Westerns) and is sadly something of a let-down. Stewart plays Will Lockhart, a trader seeking revenge for the murder of his cavalryman brother whose troop were wiped out by Apache warriors brandishing automatic rifles. Lockhart considers the man who sold the weapons to the Indians to be directly responsible and ventures out to track him down. While delivering goods to the town of Coronado, Lockhart gets caught up in the affairs of cattle baron Alec Waggoman (Donald Crisp), New Mexico's answer to King Lear. The old patriarch is going blind and agonising over how best to divide up his kingdom: should the Barb ranch go to his no-good son Dave (Alex Nicol) or trusty foreman and surrogate Vic Hansbro (Arthur Kennedy)?

There are some shockingly violent action sequences here, notably Lockhart's lassoing at the salt flats and Dave blasting a hole through his hand, but these moments are too sporadically placed and abrupt. The mountainous terrain suitably echoes the characters' angst but Mann spends too much time labouring over the tedious Oedipal psychodrama absorbing the Waggoman clan and too little examining Stewart's haunted avenger. Mann's other characters are simply less interesting than Lockhart (Nicol and Kennedy are physically similar and often hard to tell apart), although Aline MacMahon does bring some very welcome sass as rival rancher Kate Canadine.

All-American everyman Stewart adds another obsessive to the impressive roster of psychotics he had begun accumulating in the fifties in his work with Mann and Alfred Hitchcock*. Lockhart, a former army captain himself, takes to the trail as a frontier detective trying to unravel a whodunnit. "Hate is unbecoming on some men, Mr Lockhart. On some men it shows", his companion Charley O'Leary (Wallace Ford) observes. While he is motivated by a hatred of injustice, Lockhart remains a hard man to read. Although he knows the Indians carried out the atrocity that claimed his brother, he refuses to blame them, unlike John Wayne's racist Ethan Edwards in The Searchers (1956). Instead he is fixated on the mysterious, amoral gun runner who made it possible. Similarly, he does not devote much time to rounding up Dave Waggoman's posse, who, after all, dragged him through fire, razed his wagons and executed his mules. Lockhart seems quite satisfied with the financial restitution offered by Alec and a brief wrestle, whereas the similarly affronted Jed Cooper (Clint Eastwood) in Hang 'Em High (1968) signs up as a marshal in order to mercilessly hunt down and persecute those who wronged him. Lockhart's acute but idiosyncratic interpretation of the case before him is never sufficiently probed by Mann. In the end, the man from Laramie winds up leaving town as opaque and unexplained as when he first arrived.

Ultimately the film, co-scripted by Frank Burt, the man behind Stewart's Six Shooter radio show, proves a disappointingly so-so outing but worth a punt anyway and memorable for the damn silly theme song by Lester Lee and Ned Washington. Bizarrely, former BBC Radio 2 DJ Jimmy Young scored a UK number one with this laughable ballad in 1955. All together now...