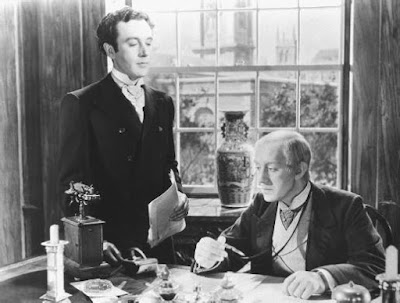 A matter of some delicacy. Robert Hamer's Kind Hearts & Coronets for Ealing must be one of the blackest comedies ever produced. Looking like nothing less than an inky Ronald Searle drawing brought to life, Kind Hearts is in fact an adaptation of Roy Horniman's little-remembered 1907 novel Israel Rank, a work since suppressed over misguided accusations of anti-Semitism, the protagonist in the book being a Jew and Horniman actually intending to satirise the abiding mood of anti-Semitism then rife in Edwardian England, rather than justify it. The film instead tells the story of Clapham draper's assistant Louis Mazzini (Dennis Price), who has grown up in poverty after his aristocratic mother was disowned by her wealthy family, the D'Ascoynes, as punishment for eloping with his father, an Italian opera singer. When Mrs. Mazzini passes away with her dying wish scorned, Louis vows vengeance on his relatives and conspires to murder his way down the family tree, "pruning" its branches until he can finally claim his birthright, the dukedom of Chalfont.


Alec Guinness usually wins all the plaudits for his masterly comic turn, playing no less than eight members of the D'Ascoyne clan including a windbag parson, a hubristic admiral and, best of all, Lady Agatha, a militant suffragette on the war path ("I shot an arrow in the air/She fell to earth in Berkeley Square") and very good he is too. Guinness certainly earned his praise: nearly drowning on set as the naval man going down with his ship and narrowly avoiding a balloon accident by insisting that a stuntman stand in for him in full drag, so lapse were studio safety standards at the time.

However, there's certainly a case to be made for Price being the real star here, the actor playing twin roles himself and carrying the film with huge suavity and cunning as Louis, the sort of serial killer you really can't help but love. Both men attributed their success to Hamer, a Cambridge economics scholar who had been sent down for indulging in a homosexual affair, an opponent of hypocrisy thereafter whom Guinness described as, "looking and sounding like an endearing frog". Also stealing scenes is Miles Malleson as a Dickensian hangman, possibly an ancestor of Mr. Dennis from Barnaby Rudge (1841), who is disappointed to be denied an opportunity to test out his new silken rope ("The last execution of a duke was very badly bungled. That was in the days of the axe of course"). Joan Greenwood is at it too as Louis' childhood sweetheart, the equally calculating Sibella, whose lisp is, quite frankly, irresistible. Louis' trial in the House of Lords (his privilege as a duke), charged with the one death he is not responsible for, makes for an astonishingly original finale and, 60 years on, Kind Hearts & Coronets remains the quintessential English bloodbath.

Watch out for future Dad's Army (1968-77) star Arthur Lowe in an early cameo as a reporter at the end when Louis emerges from prison with an impossible choice to make.
Posted by Joe at 14:48