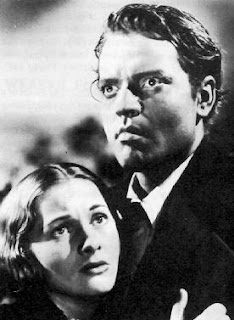 You've got to love a nice, stodgy, overblown literary adaptation once in a while. Five years after William Wyler's popular Wuthering Heights (1939) with Laurence Olivier as Heathcliff, Orson Welles had a crack at his own jaunt through Brontë country, strutting about in riding boots and bellowing for all he's worth as Mr Rochester, the brooding, reluctant Bluebeard of Jane Eyre. Joan Fontaine, fresh from two similar roles in Alfred Hitchcock's Rebecca (1940) and Suspicion (1941), makes for an altogether more mild, quietly determined Jane and the clash in their acting styles only adds to the fun.

Stripping Charlotte Brontë's classic doorstop from 1847 of much of its weird, fairytale otherness and resetting it in what appears to be a giant stone Death Star leering over the Yorkshire Moors, perhaps the real highlight of this version is Orson's entrance, his horse rearing up through the mist, his cape billowing, his prosthetic Roman nose cast against a troubled sky. Wartime audiences lapped it up and today the film's melodramatic, irony-free approach is as refreshing as an ice cold beer in Hades.

Director Robert Stevenson also contributed to the script, along with Aldous Huxley, Henry Koster and John Houseman, Welles's long-suffering collaborator from the Federal Theatre Project and Mercury Theater On The Air (1938). Other Mercury veteran's appearing here include composer Bernard Herrmann and actress Agnes Moorehead, who features as Mrs Reed during the opening account of Jane's miserable childhood. This is one of the film's strongest passages, helped hugely by a fantastic performance from child actress Peggy Ann Garner alongside the sneering Henry Daniell as Mr Brocklehurst. His introduction recalls the invasion of David Copperfield's happy home by Mr Murdstone (Basil Rathbone) in George Cukor's superior 1935 Dickens adaptation. That David O. Selznick production benefited hugely from a bevy of hilarious character performances, not least the Great Man, W.C. Fields, as Wilkins Micawber. Daniell aside, this is something distinctly lacking from Stevenson's Jane Eyre. The decision not to reveal Bertha Mason, the mad woman in the attic, on camera is a bold one and pays off, suggesting an unimaginable evil too awful to even contemplate. Elsewhere though Hillary Brooke as Blanche Ingram and John Abbott as Richard Mason fail to make much of an impression. Far better are the film's child actors. Apart from Garner, Margaret O'Brien does well as Mr Rochester's precocious French daughter Adele, while a young and uncredited Elizabeth Taylor makes her mark as Jane's consumptive school chum Helen Burns. 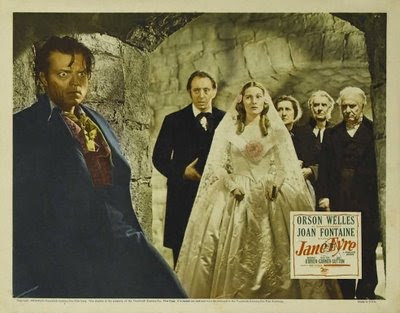 The Mercury Theatre production of Jane Eyre is available online at Calfkiller's Old Time Radio Archive and is well worth checking out. The series also includes Welles's notorious Halloween broadcast of War Of The Worlds, which caused panic in the streets when it was first aired in the US on October 30 1938. Calfkiller's site also hosts many other forgotten gems of American radio, including the James Stewart horse opera The Six Shooter (1953-54), Vincent Price as aesthete sleuth The Saint (1944-51) and Bold Venture (1951-52), a steamy, tropical noir series set in Havana and starring husband-and-wife team Humphrey Bogart and Lauren Bacall: "Adventure! Intrigue! Mystery! Romance!" A wonderful free resource, enjoy it while you still can children.
Posted by Joe at 12:04