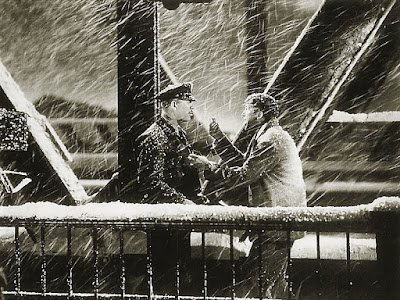 Well it just wouldn't be Christmas without a trip to Bedford Falls now would it? Somehow this baby just never gets old and these days the goings on at the Bailey Building & Loan seem more topical than ever.

Frank Capra's film was based on a 21 page, 4,000 word short story called 'The Greatest Gift' that was enclosed inside the Christmas cards sent out by American Civil War historian Philip Van Doren Stern in 1943 after it had been rejected by a string of magazines four years earlier. It was only when Cary Grant's agent got hold of one of the 200 original copies through a friend that RKO bought the rights for $10,000, intending it as a vehicle for Grant. Dissatisfied with several attempts to adapt the tale into a feature, they sold it on to Capra's short-lived independent production company Liberty Films. After nine different writers had had a crack at it at various stages (including Capra himself, Dalton Trumbo, Clifford Odets and Dororthy Parker), a festive ritual was born. 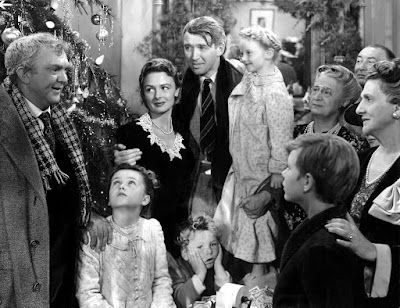 I'm sure most people have seen this cherished Scrooge fable several zillion times but in case you haven't, It's A Wonderful Life is about a suicidally depressed idealist under investigation for embezzlement who is about to throw himself off a bridge on Christmas Eve when a second-class angel (Henry Travers) intervenes and takes him to a parallel universe so that he can see what life would have been like for his nearest and dearest if he'd never been born. There he finds the Rockwellian Bedford Falls turned into a nightmarish, noirish dystopia called Pottersville where everyone he might have known is deeply unhappy. Returned to earth, he re-evaluates his life, runs home and discovers that he's really "the richest man in town" because "no man is a failure who has friends."  I've never understood how anyone could call Capra's film schmaltzy or sentimental. There's way too much (very realistic) pain and darkness under discussion for that.

James Stewart is absolutely extraordinary as George Bailey, the put-upon, thwarted dreamer whose childhood hopes of leaving town to see the world have been persistently frustrated by unfortunate and bitterly ironic quirks of fate. Stewart is essentially asked to play two completely opposing roles here - that of the idealistic high school graduate and the desperate, angry, failed father and husband with an abusive streak - and turns in a masterly performance. The unshaven, teary, lank haired look of this beloved figure as he staggers towards the snow-dashed bridge to do himself in is about as distressing as it gets - this from a leading man not always given his due as an actor and who had considered giving up the profession altogether after his experiences serving as a bomber pilot in WWII (co-star Lionel Barrymore talked him out of it with a lengthy lecture on the social importance of his craft). Aside from the star turn, with It's A Wonderful Life you get quite possibly the greatest supporting cast ever assembled in movie history: Barrymore as the villainous Mr Potter, Travers as the endearingly dotty Clarence Oddbody, Donna Reed as Mary, Gloria Grahame as Violet, the town's tart with a heart, Ward Bond as Bert the cop, H.B. Warner as the drunken pharmacist Mr Gower and Thomas Mitchell as the forgetful Uncle Billy, complete with pet raven - all relatively small, second tier roles. Wow. The performance of Warner in particular and the plight of Mr Gower made me sob like a girl the last time I saw this.

The film certainly has its detractors - Elliott Stein of Sight & Sound once sneered, "Its spiritual meat is that the only thing wrong with capitalism is Lionel Barrymore" - but I just can't agree. There are any number of great scenes in It's A Wonderful Life, two of my favourites being the timeless romantic interlude from the courtship of the young George Bailey and Mary just after the incident with the Charleston contest and the movable gymnasium floor and this little corker, one of Capra's best ever David and Goliath moments as our man takes on the unfeeling Big Business bulk of Henry F. Potter. Stick it to him George.


The newlyweds' first night in their leaky new home, waited on by Bert and Ernie after their honeymoon has fallen through, is also one of the most romantic and moving scenes in movies. Sheer magic of the sort that reminds me why I care about art in the first place.

If you can't get enough of this seasonal favourite, check out the Lux Radio Theater for a broadcast from 10 March 1947 in which Stewart and Donna Reed reprised their roles while Victor Moore took over the guardian angel duties as Clarence. Enjoy.

P.S. By way of further reading, I've just discovered a brilliant article on the film from New York Times journalist Wendell Jamieson that you can find here in which he goes further and argues that Capra's Yuletide classic is in fact, "a terrifying, asphyxiating story about growing up and relinquishing your dreams, of seeing your father driven to the grave before his time, of living among bitter, small-minded people. It is a story of being trapped, of compromising, of watching others move ahead and away, of becoming so filled with rage that you verbally abuse your children, their teacher and your oppressively perfect wife." Jamieson also suggests that Pottersville would actually have represented a more promising future for Bedford Falls in that it embraces the services industry and would thus have avoided the sort of post-industrial economic decline seen in many equivalent US towns in the decades since. Maybe it would have been better if George Bailey had never been born after all...
Posted by Joe at 11:29