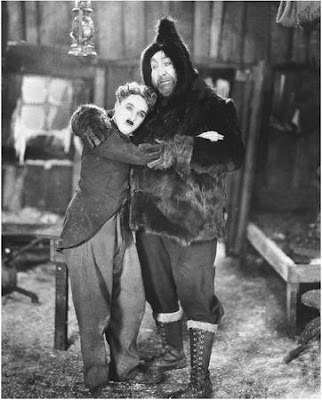 Some critics, clamouring desperately for a controversial opinion, will tell you that Charlie Chaplin is unforgivably sentimental and pretentious or that he's an inferior artist to Buster Keaton. These people are morons. Only the emotionally stunted could snub Charlie's unabashed humanity as "sentimental". The man simply has a big heart, a ready reservoir of sympathy for the plight of his fellow man born from his experiences of growing up in abject poverty in south east London. And as G.K. Chesterton said, "It is as healthy to enjoy sentiment as to enjoy jam." Similarly, Chaplin's aspiring to articulate profound, universal truths through his comedy, to make popular art, could only be called "pretentious" by the terminally shallow. As for his lacking Keaton's comic talents, Sight & Sound reviewer David Robinson put it best in 1972 when he wrote, "All they had in common was the chosen trade of creating laughter... Keaton's was an art of understatement, of concealment; Chaplin's of virtuosity and display". Comedian Paul Merton rightly labelled the debate "tiresomely idiotic" in his book Silent Comedy (2007) and surely put it to bed with the ultimatum, "they are both fantastic. There's no need to choose between them. Enjoy them both!" Quite so. There's more than enough room for The Gold Rush and The General (1926) in this crazy world.

The Gold Rush finds the Little Fellow turned Lone Prospector in Alaska, 1898, and contains many of Charlie's best known routines, including the classic boot eating scene (above), the log cabin teetering on the edge of a snowy precipice, Big Jim McKay's (Mack Swain) chicken hallucination and, of course, the dance of the rolls (below). The inventiveness of this first set piece cannot be over-emphasised. Twirling the laces like spaghetti, fillitting the sole like a fish, cracking the hobnails like wishbones - genius, nothing less. However, genius came at a price for poor old Swain, who wound up with a nasty case of the runs after consuming one too many prop leather boots made from liquorice over multiple takes. A nice little story-of-the-scene for you there. Incidentally, another boring point frequently raised by Chaplin-deniers is that he stole the dance of the rolls sequence from Keaton's directorial debut, The Rough House (1917), starring Fatty Arbuckle. Well, so what? You say rip-off, I say homage. Charlie makes more of it anyway.


I can only say that anyone who doesn't feel for Chaplin in his naive pursuit of the more worldly dance-hall girl Georgia (Georgia Hale) must be a bigger bastard than Black Larsen. But the happy ending awarded to the nouveau riche tramp must have seemed bitterly ironic to Chaplin, given his sad personal circumstances at the time. The part of Georgia was to have gone to the underage Lita Grey (who had previously appeared as an angel in The Kid, 1921) until Charlie became romantically involved with her, got her knocked up and was hustled into a shotgun wedding in Mexico by the girl's scheming mother and uncle, a shyster lawyer. The ceremony occurred just three days after the funeral of director Thomas H. Ince, "the father of the Western", whose death after a party aboard William Randolph Hearst's yacht, the Oneida, remains a mystery to this day. Some say Hearst himself put a bullet in Ince's brain, mistaking him for Chaplin, whom he suspected of carrying on with his own mistress, Marion Davies. This is certainly the thesis of Peter Bogdanovich's film The Cat's Meow (2001) and would explain the hostile coverage meted out by Hearst's newspapers when Chaplin divorced Grey in 1927. Lita's full first name, Lillita, provided the inspiration for Vladimir Nabokov's notorious "nymphet" and she is described bitchily by Kenneth Anger in Hollywood Babylon (1975) as, "Impudent but not clever, with a broad face and low forehead, she was backward in school." Nevertheless, the little tramp left the Little Tramp short of a million dollars with two sons and prematurely grey hair.

Still, Charlie can take heart from the fact that The Gold Rush remains one of the most pioneering comedies ever committed to celluloid. Building on the comedy of peril popularised by Harold Lloyd in Safety Last! (1923) with epic scale and great jokes, Chaplin never neglects a very human story of hunger and longing. See the 1942 version for his hilarious narration: "You can be most annoying at times", Big Jim mutters to the Little Fellow, as his fidgeting almost causes them to plummet to their deaths in the wayward cabin. On that note, have a very merry Christmas and gawd bless us, every one.
Posted by Joe at 11:18