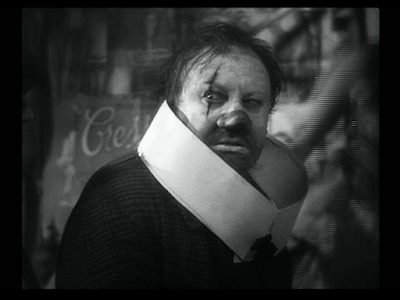 Creepy. The BFI Southbank in London is showing a Josef von Sternberg retrospective this month and the above shot of Emil Jannings is taken from the German auteur's most famous work, The Blue Angel, the film that launched Marlene Dietrich on an unsuspecting world.

Two versions of Der Blaue Engel exist: one in German, one in English (recently rediscovered and apparently inferior). I saw the latter a while back and was initially disappointed by its stagy plot and slow progression. Endlessly parodied and referenced, Dietrich vamps her way through signature song 'Falling In Love Again' with some gusto and doesn't disappoint in a top hat and fishnets. But as sensuous as she is, this brutal little melodrama really deserves to be remembered for Jannings' sad performance as Professor Immanuel Rath, enamoured bachelor.

A rather superior but buttoned-up provincial school teacher, Rath one day spots his charges passing around saucy photos of local cabaret siren Lola Lola (Dietrich). Confiscating them, Rath visits The Blue Angel burlesque club later that evening hoping to catch his wayward pupils sneaking in. There Rath meets the beautiful, provocative Lola and falls hopelessly in love. Returning a second time to hand back some underwear planted on him as a prank, Rath and Lola's romance begins. The next morning he is late for school (nudge nudge) and arrives to find his students running amuck. He is promptly dismissed by a furious headmaster. Now married to Lola but struggling for money, the professor's domestic bliss cannot last and he is forced to take a job as a lowly clown in her act to make ends meet. The proud Rath becomes increasingly bitter, jealous and paranoid and suspects his showgirl wife of reigniting an old flame. Madness descends and his destruction becomes inevitable. 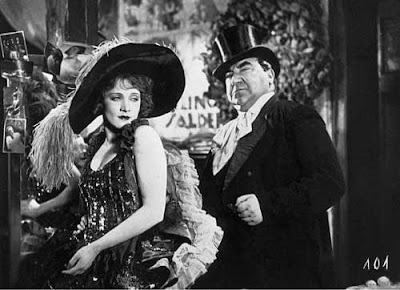 Jannings, the first-ever recipient of the Academy Award for Best Actor a year earlier, brings real heart to a case study in human degradation, prostrating and humiliating himself at the mercy of idealised love. Punished for his hubris in abandoning a respectable way of life to pursue his lust and a lorelei who just can't help it into an unforgiving night, Rath's death at daybreak - crumpled over his old school desk, destitute, robbed of his dignity and utterly vanquished - is very moving. His melancholy liebestod perhaps recalls another aged scholar made a fool of by infatuation: Gustav von Aschenbach, who lies rotting in a deck chair on the Lido beach at the end of Death In Venice (1912). That novella was of course written by Thomas Mann, whose elder brother Heinrich's novel Professor Unrat (1905) provided the source material for The Blue Angel. Those Germans certainly love their glitter and doom.
Posted by Joe at 14:00