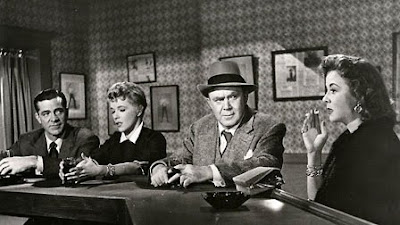 First up, here's a beauty. I've just qualified as a journalist but so far haven't had much luck breaking through at a time when the newspaper industry is in turmoil and jobs are scarce. Fritz Lang's noir thriller While The City Sleeps recalls happier days for the career newsman and is one of the most underrated movies about the subject there is.

Lang had made his name in the silent era with Dr Mabuse, The Gambler (1922), the expressionistic sci-fi dystopia Metropolis (1927) and later M (1931), the great granddaddy of serial killer flicks starring Peter Lorre. But in 1934 he was forced to leave his native Germany when Joseph Goebbels himself allegedly invited him to take the helm at the U.F.A. studio and churn out Nazi propaganda. Lang politely declined, turned on his heel and fled. Via Paris he found sanctuary in Hollywood and quickly re-established himself as a major player, making bleak but explosive urban crime dramas like Scarlet Street (1945) and The Big Heat (1953). While The City Sleeps stands as his last real celluloid hurrah. Here he is on set with stars Ida Lupino and Dana Andrews sporting an eyepatch, a then must-have fashion accessory for directors also favoured by the likes of John Ford, Raoul Walsh, Nicholas Ray and André de Toth.

A kind of 1950's ancestor to David Fincher's excellent Zodiac (2007), While The City Sleeps revolves around a fictional New York tabloid, The Sentinel, whose owner Amos Kyne (Robert Warwick) has just passed away from a heart attack. The old man's empire falls into the hands of his son and heir Walter Kyne Jr (Vincent Price), a dull playboy with an oedipal complex the size of a watermelon. Junior instigates a competition among The Sentinel's staff to find a new executive director, challenging his inherited hacks to catch the "Lipstick Killer"*, a brutal strangler responsible for a spate of dead women piling up across the city. Early front-runners include the paper's editor John Day Griffith (Thomas Mitchell), photographer Harry Kritzer (James Craig) and wire service chief Mark Loving (George Sanders). Top reporter and TV anchor Edward Mobley (Andrews, channeling Edward R. Murrow) claims to have no interest in the power struggle and oneupmanship that ensues until he receives a tip-off from a detective friend investigating the slayings. Mobley finally enters the fray, taunting the "Momma's boy" killer during a live broadcast and using his secretary girlfriend Nancy Liggett (Sally Forrest) as bait... 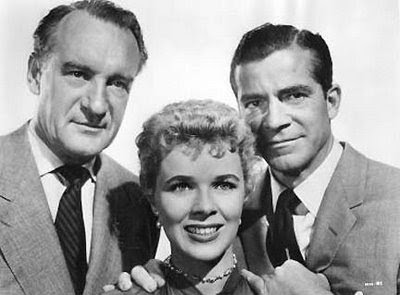 This is a hard world where ruthless reporters gladly put the lives of others at risk to secure a story and in which the line between the apparent good guys and the killer is decidedly blurry. One of the most interesting aspects of the film is Lang's bold decision to reveal the murderer's identity early on, a move regarded by many contemporary reviewers as a mistake but which allowed him to shrug off the trappings and clichés of whodunnit mysteries and focus on the motivations of his journalist protagonists. John Barrymore Jr is excellent as the nervy drug store delivery clerk with an overbearing mother and a taste for suffocation and the character seems a clear influence on later sexually-confused movie psychopaths like Norman Bates and Buffalo Bill. A classy cast of great character actors do the rest and are clearly having a ball stabbing each other in the back. There's something of Charles Foster Kane (and indeed Rupert Murdoch) about the dying Kyne Senior with his grand news corporation while the film's grimey subway chase, as the rat is driven underground, echoes the Vienna sewers sequence in Carol Reed's The Third Man (1949), although While The City Sleeps has deservedly spawned imitators of its own. New York Times reviewer A.H. Weiler damned the picture with faint praise on 17th May 1956 when he said, "While The City Sleeps is likely to keep the customers awake". Trust me, it's a whole lot better than that.

*Presumably no relation to octogenarian mass murderer William Heirens, behind bars since 1946 and thus the US's longest-serving prisoner, who answered to the same nickname.
Posted by Joe at 12:14