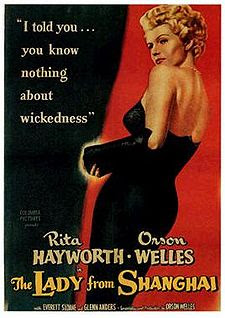 "Once, off the hump of Brazil, I saw the ocean so darkened with blood it was black and the sun fainting away over the lip of the sky. We'd put in at Fortaleza, and a few of us had lines out for a bit of idle fishing. It was me had the first strike. A shark it was. Then there was another, and another shark again, 'til all about, the sea was made of sharks and more sharks still, and no water at all. My shark had torn himself from the hook, and the scent, or maybe the stain it was, and him bleeding his life away drove the rest of them mad. Then the beasts took to eating each other. In their frenzy, they ate at themselves. You could feel the lust of murder like a wind stinging your eyes, and you could smell the death, reeking up out of the sea. I never saw anything worse... until this little picnic tonight. And you know, there wasn't one of them sharks in the whole crazy pack that survived."

Orson Welles as Irish adventurer Michael O'Hara in The Lady From Shanghai. Easily as good a speech as his more famous thoughts on Swiss history and the cuckoo clock from Carol Reed's The Third Man (1949), so long as you can get past the ludicrous blarney accent Orson adopts here, perhaps a sourvenir he picked up during his wild rover days in 1932, when, at 17, he managed to con his way into the company of Dublin's Gate Theatre.

The Lady From Shanghai is one of his most taut and entertaining pictures, an exotic and misanthropic caper shot through with romantic fatalism. Welles made it for Columbia as part of the repayment deal on the $55,000 loan Harry Cohn had given him to bail out his stage musical version of Jules Verne's Around the World In Eighty Days (1946). Cohn, whom Welles would later describe as "a monster", had history with the young prodigy, having become so jealous of his marriage to Columbia's top star, Rita Hayworth, that he had banned her from appearing in Welles's magic show for US troops in 1943. He also knew of Welles's difficult reputation and was nervous about handing him responsibility for a $2.3mn budget, until Hayworth's powers of persuasion became too much for King Cohn to resist. It was a decision he would live to regret. He loathed The Lady From Shanghai so much that he offered a $1,000 reward to anyone who could explain the plot to him. Not even Orson was able to claim it. This eccentric noir was originally titled Take This Woman and then Black Irish and based on Sherwood King's novel If I Die Before I Wake (1938), the rights to which had previously been owned by William Castle, the future horror director, whom Orson befriended and brought in to help with the script and serve as an associate producer.

Welles would later express the opinion to biographer Barbara Leaming that cinema needs to give audiences a "hallucinatory" experience if it is truly to "come alive" and The Lady From Shanghai certainly provides that, not least in the celebrated hall of mirrors finale. Andre Bazin wrote of the film in the September 1958 issue of Cahier Du Cinema:

"The Lady From Shanghai is paradoxically the richest in meaning of Welles's films in proportion to the insignificance of the script [precisely because] the plot no longer interferes with the underlying action, from which the themes blossom out in something closer to their pure states."

By the time of the film's release in 1948, Welles' marriage to Hayworth, his co-star here missing her trademark red locks, had crumbled. As Clinton Heylin noted in his book Despite The System: Orson Welles Versus the Hollywood Studios (2005), Howard Hawks had filmed The Big Sleep that same year specifically to capitalise on the sizzling chemistry between newlyweds Humphrey Bogart and Lauren Bacall, "whereas Welles portrayed his own screen goddess... as a lying bitch who deserved to die." 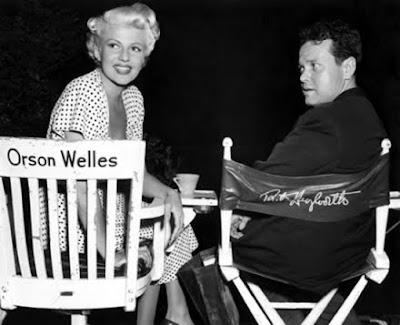